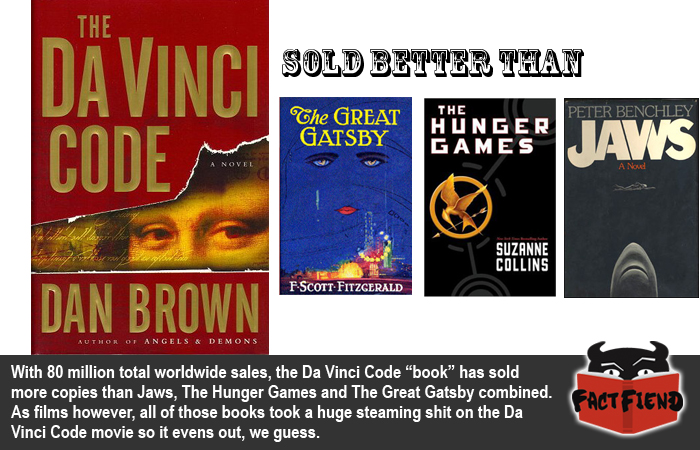 The Da Vinci code is widely accepted to be a literary turd of such magnitude copies of Harry Potter immediately catch fire in its presence. So then it’s rather annoying to realise that it’s sold better than tons of famous books, including the dictionary, or at least one version of it.

First things first, to date The Da Vinci Code has sold over 80 million copies, that means that one book has sold better than every book in the A Song of Ice and Fire series. In fact it’s sold more copies than Harry Potter and the Deathly Hallows, The Tale of Peter Rabbit, Charlotte’s Web and virtually any other book you can think of that doesn’t list God as one of the authors.

Weirdly, the book has even sold better than actual literary classics that have been available to buy for literally centuries longer than Dan Brown’s affront to logic, the original Russian version of War and Peace, Dante’s Divine Comedy,Roget’s Thesaurus and even a version of the fucking Dictionary have sold less copies than the Da Vinci code. Did you read that, THE DICTIONARY! To be clear we’re talking about Merriam-Webster’s Collegiate Dictionary, which has had approximately 55 million copies, Webster’s dictionary has sold a few more copies with 100 million sales, but still, did you honestly expect that a book released in 2003 would have outsold a world respected dictionary released over a century ago?

In fact there are barely any books that can match The Da Vinci Code in terms of pure sales, The Hobbit and The Lion, the Witch and the Wardrobe have it beat, but just barely with 100 million and 85 million sales respectively. There are less than 10 books (that haven’t been re-released tons of times like the Bible or something) that can claim to have sold more copies than it and one of those is in French so we really don’t think it should count.

I guess what we’re trying to say is, The Da Vinci Code sold a lot of copies despite being considered a really shitty excuse for a book, which if we’re honest is either the most inspiring or most depressing fact we’ve listed on this site so far.

To be clear, The Da Vinci Code has outsold this book!