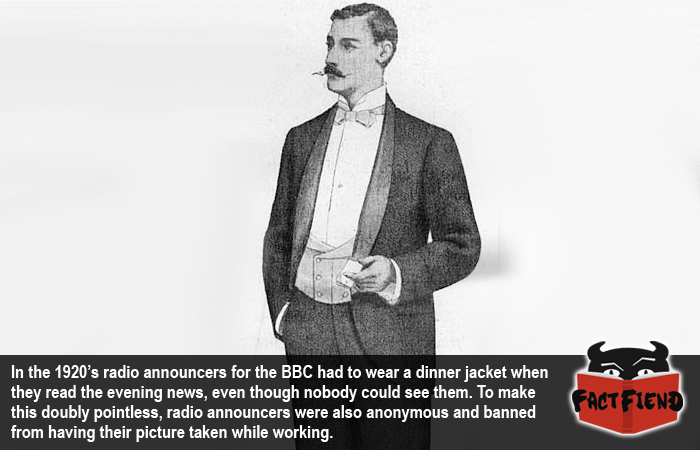 When the BBC first started delivering nightly radio broadcasts to the British public, the radio announcers they hired had to work under a number of stringent conditions. The most curious of which was that they had to wear a dinner jacket to read the news.

Just so we’re all on the same page, we don’t mean that announcers had a uniform that sort of looked like a dinner jacket or something, they literally had to work while wearing formal evening wear. Yes, even though nobody would ever see them wearing it.

Announcers were hired primarily for their oratory skills and there was a huge emphasis on proper pronunciation, diction and cadence. As the “voice” of the BBC announcers were under a huge amount of pressure to not make a mistake, and a slip of the tongue or even a loud sniff could sour the whole broadcast.

While the BBC eventually softened its stance over the years, in the 1920’s a radio announcer was held to the highest standards imaginable, which brings us to the dress code and the fact that announcers wanting to read the news had to do so while wearing a dinner jacket. If you’re wondering why the guy reading the news had to wear a suit even though nobody would ever see him, the BBC insisted upon it out of “respect to performers also obliged to dress formally“. In other words, announcers were held to the same standards as people who orated in front of crowds, even though they’d never actually be seen, as a sign of solidarity with their fellow performers.

The weirdest part of all this though is that initially, along with forcing its announcers to wear dinner jackets, the BBC also initially kept their identities a secret and refused to release pictures of them to the public. Meaning the fact they were wearing dinner jackets was almost completely pointless. It wasn’t until the 1930’s that the BBC became less strict and the public were allowed to know the face of the men who read them the news every single night.

Despite the odd demands of the BBC and the fact they were unusually coy about advertising who actually held the position, the men who took the job invariably became famous, even though 99% of people had no idea who the hell they were. It’s noted that if an announcer so much as coughed on air, the BBC would be flooded with gifts of cough lozenges and warm clothing from concerned listeners. Which is actually pretty adorable.