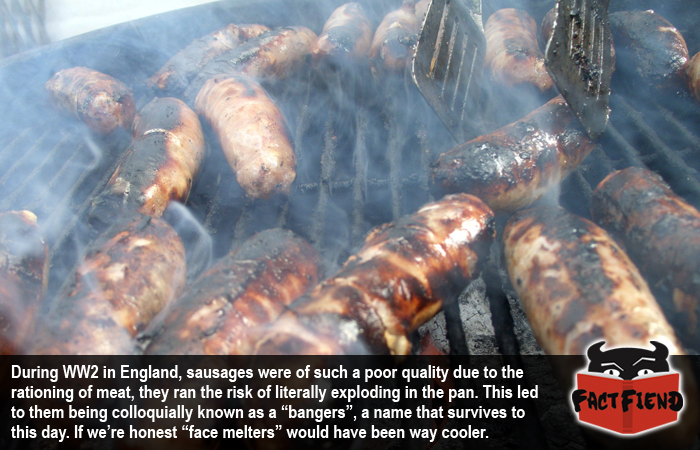 Of all the ways it is possible to lose an eye, “scalding sausage shrapnel” is probably the one that’s going to raise the most awkward questions in the emergency room. So you should probably feel sorry for people who lived in England during WW2 when that exact scenario was totally plausible.

To explain, during WW2 over in ENgland when rationing was in full effect, meat was scarcer than conversation in an elevator. As such it became increasingly necessary to “pad” meat out with whatever laying around, the easiest way to do this was to turn what little meat was available into a sausage.

Which, if you think about it, kind of makes perfect sense, even the best and highest quality sausages are only 80% meat, for the curious the other 20% is usually herbs, spices and ground up threatening letters from the legal department of KFC. Lower quality sausages can contain as little as 40% meat and still remain edible and even tasty providing the other 60% of the sausage doesn’t contain the butcher’s finger or something.

It’s even possible to make an even lower quality sausage by replacing padding out the meat with things like ground up connective tissue and fat, meaning it’s entirely possible to make a reasonably tasty sausage that only contains 20% “meat”. With that in mind you can probably see why people had a real hard on for sausages during a time when rationing and squeezing every penny was all the rage.

Even with all the possible ways they could cut corners though, some butchers still found a way to squeeze out even more profit from their meat using a little known technique called “injecting it full of water”. In fact, butchers were so prone to injecting sausages full of water that they literally ran the risk of exploding like tiny, meat filled grenades unless you punctured them prior to cooking. Now the chefs amongst you probably know that you’re supposed to do this anyway, but that’s mostly to stop the sausage from splitting, not covering your face in scalding oil!

The problem was so bad that soldiers and civilians alike eventually just began referring to sausages as “bangers” due to their tendency to f*****g explode. As anyone from the UK will tell you, people today still refer to sausages as “bangers”, though they’re far, far less likely to blind you these days, unless you eat them really wrong.