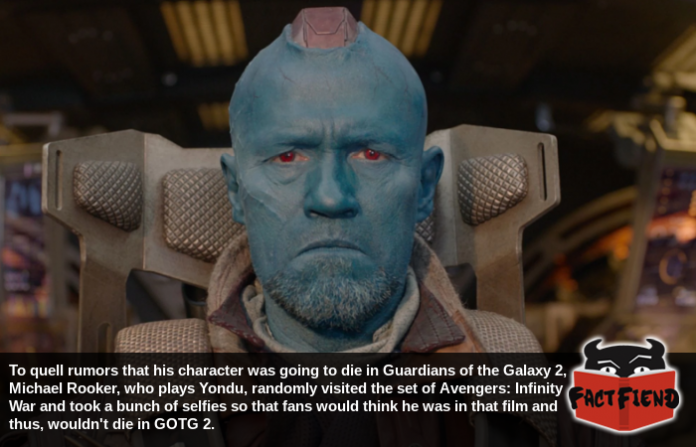 Before the release of Avengers: Infinity War the number one thing Marvel fans wanted to know was who the fuck was going to die. A question that has since been answered, but while it was still being asked Michael Rooker took the opportunity to troll everyone, with Instagram. While it should probably go without saying, expect spoilers from this point on.

You see, for anyone who doesn’t know or simply doesn’t give a shit, Michael Rooker plays Yondu, a blue-skinned giant penis owning space-pirate who can stab infinite people in a row with a whistle-powered death-needle. 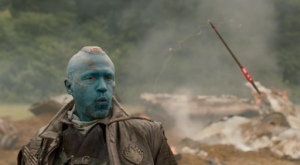 Although Yondu has a fairly minor role in the first Guardians of the Galaxy movie, his characterisation is greatly expanded upon in the sequel. Which is kind of a shame because he dies at the end of it after taking part in arguably the best set-piece in the entire fucking movie. Yondu’s death is also kind of upsetting because it happens just mere moments after he comes to terms with the fact he’s Star Lord’s father. 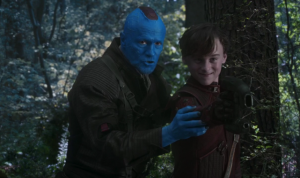 Wanting to keep the emotional gut-punch of Yondu’s death a secret, during the production of GOTG 2 Rooker randomly visited the set of Avengers: Infinity War and took a shit-ton of selfies. Some of which insinuated that he was going to blue up to once again play Yondu. The idea being that fans, upon seeing these photos, would naturally assume that he had a role in the film and thus, wasn’t going to die in GOTG 2.

However, the gambit apparently paid off just a little too well because when GOTG 2 was released, fans assumed that Rooker’s visit to the Infinity War set meant that his character was going to somehow come back to life. This forced director James Gunn to issue a statement stating that Yondu had been killed for good in GOTG 2 and that he wasn’t coming back.

Obviously fans were a little miffed about this because, well, Michael Rooker is fucking awesome and it also didn’t explain why he was dicking around with the rest of the Guardians cast on the set of Infinity War. In response Gunn issued another statement revealing that Rooker’s trip to set was a calculated move on their part to purely trick fans who like to over-analyse casting news and whatnot into thinking his character survived GOTG 2.

Or, to put it another way, Michael Rooker got paid actual money to go hang out with the cast of Infinity War almost purely to annoy rabid Marvel fan boys.