Whose Line Is It Anyway has always had a very dedicated and passionate fan base, amongst which there is one name that causes opinions to divide like they’re made of water and aquaphobic oil, Kathy Greenwood. Despite being one of the shows most popular female performers, she’s infamous for once spending an entire episode without saying a word.

If you’re not familar with Whose Line Is It Anyway, the basic idea of the show is that it’s entirely improvised by the performers taking part on the spot. For example, there’s a popular game on the show simply called “Props” during which performers have to improvise a scene or joke with an innocuous or random object. Like so. 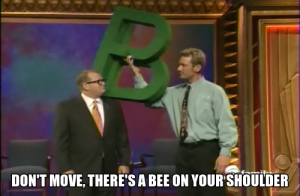 In the time the show has been on air in the US and UK it has played host to some of the most respected improvisational comedians in the world including but not limited to: Greg Proops, Paul Merton, Eddie Izzard and Robin God-damn Williams.

This isn’t even mentioning that the show’s main-stay performers, Wayne Brady, Ryan Stiles and Colin Mochrie have been consistently voted as some of the finest and sharpest comedic minds in the business by critics and their peers. In other words, to appear on this show you have to be able to react faster than a mongoose fighting a cobra made of biceps and then make it funny to boot.

Appearing in 33 episodes of the show during its original run, Kathy Greenwood is statistically one of the most popular recurring guest stars Whose Line has ever had. However, there’s a small, but dedicate group of fans who don’t seem to agree and boy do they love talking about it, like in the comment section of this article published in 2013, 8 years after she last appeared on the show and 6 years after that run of the show was cancelled.

So why do fans hate her so much that the Whose Line wiki refer to her as “one of the worst guest-stars throughout the show’s run“? Well for the most part the hate seems to stem from the fact that Kathy is a woman who has the audacity to try to be funny, which is of course just awful. However, lost amongst the wealth of bilious venom is a single saline fact that kind of stands out, she once went an entire episode without saying anything.

As noted here, in the second episode of the fourth season, Kathy only directly appeared in games in which she didn’t need to speak with the exception of scenes from a hat, during which she failed to offer a single suggestion. Meaning throughout the entire episode, as far as we’re aware (the show’s often cut a lot of content from each episode due to time constraints) Kathy didn’t open her mouth once. What makes this more amusing is that Kathy actually “won” that particular episode, which if we’re honest only makes this fact more impressive.

We’re not saying Kathy is a bad comedian because she’s honest, pretty freaking hilarious, we’re just think it’s really interesting that there’s an episode of this show where a contestant won without speaking.