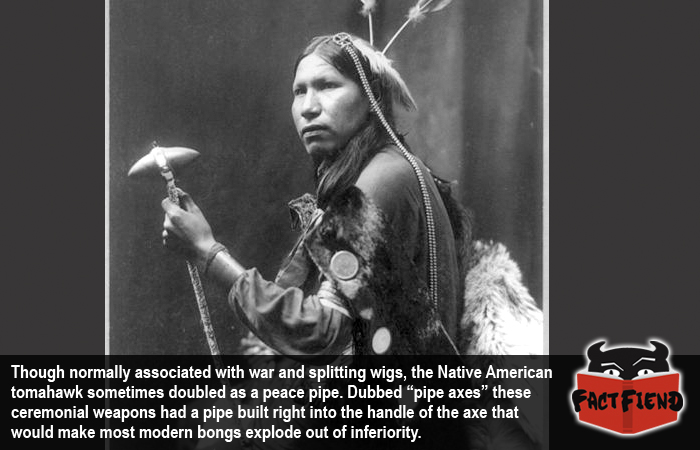 Though we’re guessing most people reading this learned everything they know about tomahawks from Assassin’s Creed 3 and Nightwolf from Mortal Kombat, we’re going assume that even if you played the absolute shit out of those games you never realised that some tomahawks doubled as bongs.

Now we should be clear and mention that there was a very distinct difference between the regular tomahawk a Native American would use in battle, like the one being modelled by Afraid of hawk in the image above and a pipe tomahawk like the one pictured below.

Although they were sharp enough to cut through skin and bone, pipe tomahawks were more often than not relegated to a purely ceremonial role and they generally weren’t considered to be suited for kombat, mortal or otherwise. This is because the inclusion of a pipe in the handle made it both fragile and unbalanced, meaning it could neither be thrown or swung anywhere near as effectively as a regular tomahawk. According to Native Indian’s, the axe head of the pipe tomahawk is meant to symbolise war whilst the pipe end (or the party end as it was later known) is meant to symbolise peace. It’s for this exact reason that they were often given out to seal alliances or otherwise let another group of people know that things were cool.

Weirdly, despite the fact that this version of the tomahawk is noted as being one of the most popular, seeing as they were commonly given away as gifts, few people are aware they exist because no movie, video game or TV show seems to have the balls to show a man smoking drugs from the handle of an axe.

That said the pipe tomahawk is technically capable of being used as an actual weapon if you really need it to be, since it is in essence an actual, working tomahawk with a pipe drilled into the handle, it’s not recommended that you throw modern reproductions of them due to the fact they’re work much better as bongs. Then again, you probably shouldn’t throw any sort of tomahawk because you’ll never be as cool as Nightwolf and it’s really hard to explain THROWING A FUCKING AXE you just paid 300 dollars for, away.

It’s also noted that some pipe tomahawks were created as peace offerings by Europeans trying to make a good impression on Natives. Which just goes to show that even back then, people still appreciated being given a novelty bong as a gift.