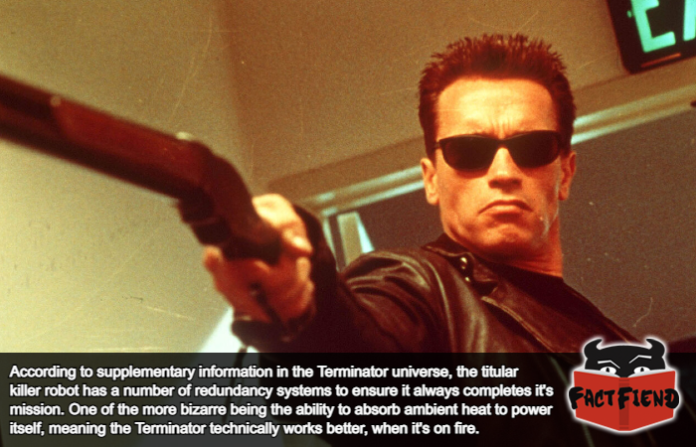 According to the series of movies in which it plays the title role, the T-800 is a nigh-unstoppable blend of bleeding edge technology and science powered by a genocidal AI that has already curbstomped 95% of humanity. Something that probably has a lot to do with the fact that being a flaming skeleton makes it run faster.

A sentence that probably people who watched the movies wondering where in the hell that was mentioned, because while Terminators are shown to be virtually indestructible in the movies, heat seems to be the one thing capable of actually damaging them. 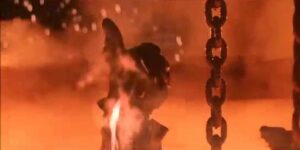 Well this particular piece of Terminator lore comes from the novelisation of the original film which actually answers a few questions about the titular killer robot people that precisely zero people gave a shit about but are amusing nonetheless. For example, ever wondered why the Terminator seems to near-exclusively see the world in infrared, which get this, is called fucking Termovision in-universe?

Well the novel establishes that the Terminator can actually “see” the same way we can, it just chooses not to as seeing in infrared helps it conserve power. Likewise for no particular reason the novel also explains that Terminators are constantly sweating but nobody really knows why. Which explains why Arnold Schwarzenegger looks uncomfortably moist throughout the entire film. 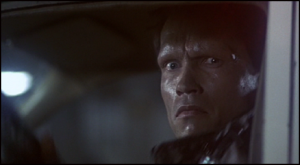 Speaking of heat, the novel also mentions that each and every T-800 has a number of in-built redundancy systems to stop it running out of power, because Skynet wanted to make sure any humans it encountered were doubly fucked. The most notable of these being heat sinks that allow the T-800 to turn itself into a flame-powered turbo skeleton.

Specifically the novelisation of The Terminator notes that T-800 is able to absorb ambient heat from its surroundings to power and even revive itself from apparent “death”. Something the film Terminator 2 alludes to when the Terminator in that movie is able to turn itself back on after seemingly being shut down. While the movie doesn’t mention it, the director’s commentary for that scene explains that the machine is able to do this because it has absorbed enough heat from environment to activate one of its many redundancy systems.

Here’s the thing though, according to the novel, the Terminator isn’t just able to power itself via ambient heat but empower itself, with the novel explicity noting that the Terminator in Terminator 1 waits for its flesh to burn away because it’s faster and stronger without it and the excess energy provided by the fire it is currently being consumed by.

In fact the novel goes as far to note that the Terminator seemingly knows that it is deadlier as a chrome-plated skeleton that it is when it looks like Arnold Schwarzenegger. With the book mentioning that the Terminator waits for its flesh to be burned away before continuing with its mission because it knows it will be able to move faster. Meaning the Terminator sees being set on fire as a tactical advantage and the stated, canon reason it waits for a few seconds before chasing after Sarah Connor again in the first movie was because it runs faster, as a skeleton. 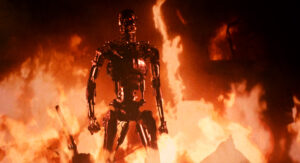