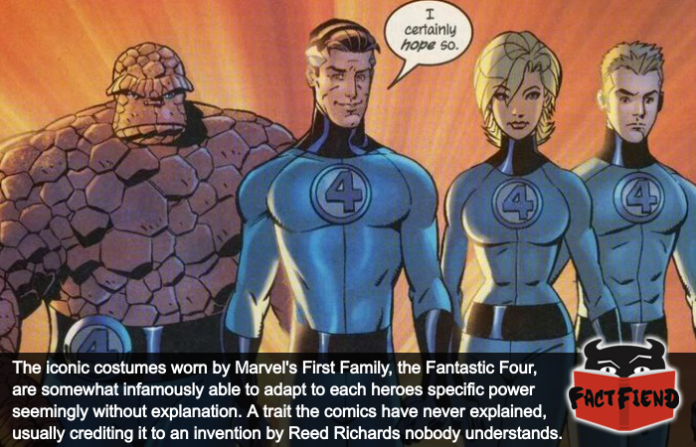 The Fantastic Four have been a comic mainstay for well over half a decade at this point and during that time Marvel’s First Family have had more costume changes than a drag queen with OCD. While the costumes have undergone numerous visual redesigns, a constant and fittingly fantastical feature of each one is that they’re able to survive constantly being on fire for no particular reason.

You see, a common feature of costumes donned by Marvel’s First Family is that they’re perfectly matched to the individual power-set of each founding member, in addition to being near indestructible. For example, Susan Storm’s costume is able to turn invisible whilst Reed Richard’s costume is able to deform and stretch itself as far as he can, allowing Mr. Fantastic to slap someone with his impervious mega-dong should he really feel like it. 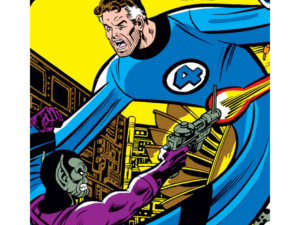 In addition to being near-impervious to all forms of harm, deformation and temperature differences (an important feature when one member of the team is almost always on fire), the costumes also contain hyper-advanced micro-computers allowing them to function as royal blue MacGuffins whenever the plot demands it.

Now while you’d be tempted to say that the costumes are able to do all of this due to being invented by a man with a dick a mile long and an entire wall of his house coated in PhDs, the first costumes donned by the team were actually invented by Susan Storm. As for how they somehow survived being on fire like all of the time, it would infamously take several issues for a comic to mention off-hand that all of the costumes were made of “unstable molecules“. Comic jargon for something the writer doesn’t have the technical or scientific know-how to explain and wants fans to stop writing in to complain about.

Exactly what Unstable Molecules are isn’t clear and despite being introduced in the comics half a century ago, have never been explained with the comics merely explaining that they were discovered by Mr. Fantastic (even though they were mentioned in earlier comics) and that nobody understands how they work. Except Reed Richards whose too busy being a smug prick to explain it to anyone. 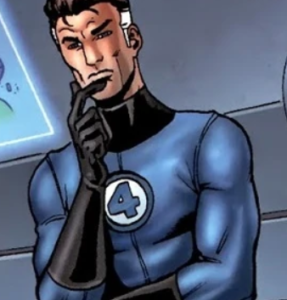 Hell, the closest to an actual explanation we’ve ever gotten is a panel in one comic where it’s noted that Unstable Molecules react to the activation of superpowers somehow and then do whatever is necessary to the more stable molecules around them to adapt to said superpower.

While this sounds like a bit of a cop out, and let’s be honest, it kind of is, the existence of Unstable Molecules in Marvel canon has led to an amazing bit of lore. That, as a favour to a fellow scientific mind, Mr. Fantastic invented a pair of super stretchy purple pants for Bruce Banner so that he wouldn’t be swinging dong when he transformed. 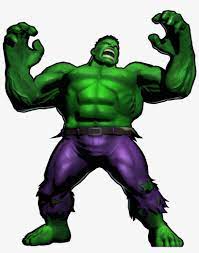