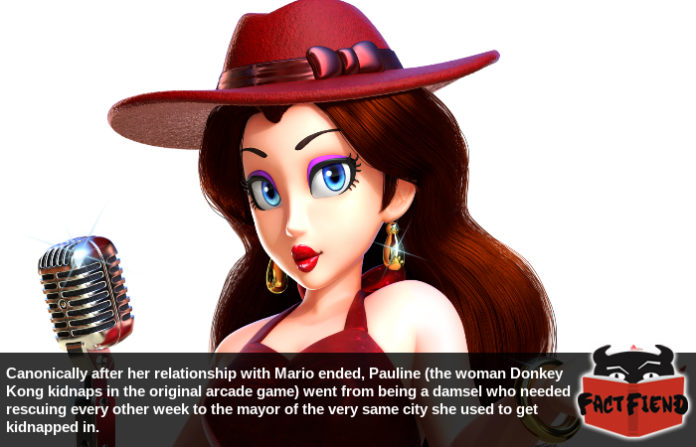 You have to admit that for a dumpy Italian plumber who walks around wearing crappy red overalls most of the time, Mario has some pretty high standards. As it turns out, Mario’s first girlfriend is actually doing much better than his current one (who remember, is a fucking princess) seemingly just because she no longer had to put up with his shit.

You see, in the very first game Mario appeared in, Donkey Kong, his love interest wasn’t Princess Peach, but an almost identical looking damsel-in-distress called Pauline who inexplicably found herself being kidnapped by an 800 pound gorilla three times a week. 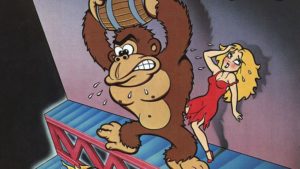 Although early games in the Mario canon established that the portly plumber and Pauline were an item, the idea was almost immediately dropped following the introduction of Mario’s new Bae. Princess Peach. Following this, games featuring Pauline instead began to suggest that her and Mario were just “close friends” and that there was nothing romantic about their relationship. Over time, she began to appear less and less in Mario games and when she did, the game’s established that for some reason, she had dyed her hair brown and stopped wearing the trademark pink dress she sported in Donkey Kong … 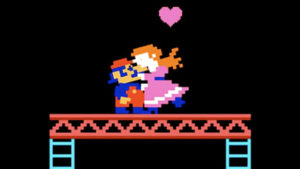 And swapped if for a more revealing red halter neck dress, which, for the record, had no effect on her ability to avoid being kidnapped by giant gorillas. 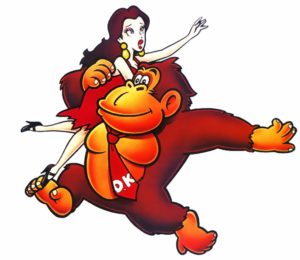 Initially it was assumed by that the decision was simply a gameplay contrivance so that players unfamiliar with the games could easily distinguish Pauline from the more popular Princess Peach, since although the two looked alike, they did share a number of design elements which could potentially confuse young fans.

However, in Super Smash Bros for the Nintendo 3DS, fans were given the closest thing to an official, in-universe explanation for the change in the form of a description for a trophy sporting her new design. Essentially, the trophy suggests that the canon explanation for Pauline changing from blonde to brunette is that she wanted to differentiate herself from Princess Peach. In other words, she changed everything about her appearance because she didn’t want people to mistake her for her ex’s new girlfriend. You know, the same girlfriend who gets kidnapped by a giant turtle monster in every Mario game just like she used to 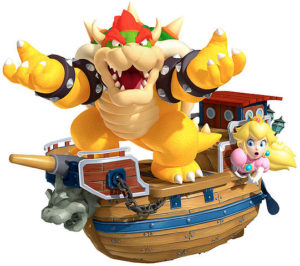 We don’t know about you, but that to us sounded like Pauline was sick and tired of being mistaken for Mario’s current, apparently useless girlfriend and wanted people to start taking her seriously. Womething that apparently worked out great for her, because while Princess Peach is still being fucking kidnapped in mainline Mario games, Pauline is canonically the mayor of the same city she got kidnapped in the first game.

Or to put it another way, after breaking up with Mario, Pauline slowly climbed the political ladder of the same city she’d been a victim in for decades until she ran that bitch. She went damsel-in-distress who got kidnapped every other week by a horny ape, to one of the most powerful women in the Mario universe and it’s all seemingly because she told Mario to fuck off. At this point we’re staring to think dumping Mario is the best thing that ever happened to this chick and we’re curious about what Princess Peach could achieve if she gave the plumber the old heave ho too. We mean, she went from being the beloved and benevolent ruler of an entire kingdom to a kidnapping victim the instant Mario came into her life.

We mean, it couldn’t hurt for her to kick his ass to the curb, imagine how much faster she could drive during this go-kart competitions if she didn’t have 180 pounds of man stuck to her hip. 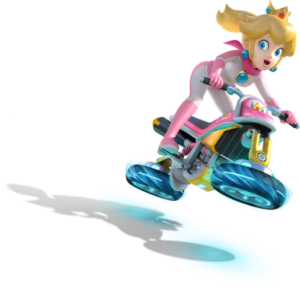