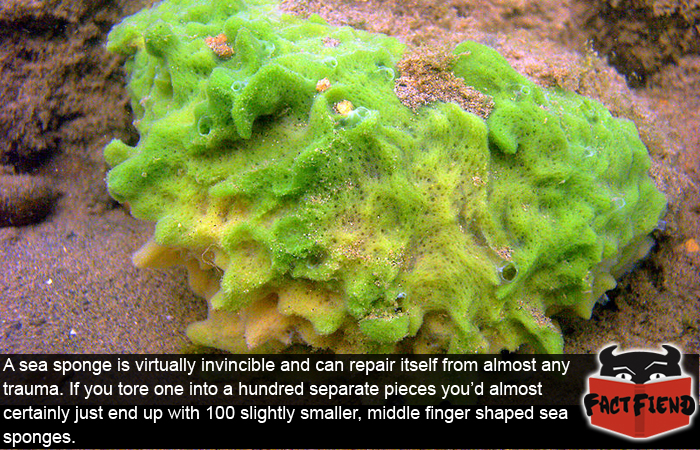 The humble sponge, square pants or otherwise is secretly one of the most hardcore creatures on the entire planet. Though its appearance would lend you to believe it’d last about as long as the English language in the comment section of a YouTube video in a fist fight, you literally couldn’t kill one with your bare hands.

We’re not making that up by the way. Scientists have torn sponges clean in half only for them to grow into two entirely different, and equally as incapable of giving a shit sponges on separate sides of a rapidly becoming too small sponge tank.

Not content with giving sponges one reason to hate us when they finally realize they’re invincible, scientists have cut sponges with scissors, destroyed them with blunt force and even blended them into a fine spongy paste. Every time the sponge has either re-formed like the T-1000 or grown into a small army of unamused and scissor mocking sponges with a new reason to want to evolve into the shape of a knife.

To truly test the sponge’s ability to laugh in the face of being obliterated, they have been known to fully recover from being broken down into their component cells by being forced through a fine sieve. If you did that with any other creature you’d be called a monster, when you do it to a sponge you’re called Earth’s last hope at finding a way to stop the sponge menace.

Of course because they lack any real brains, sponges don’t know that they can’t be killed so they don’t really pose a threat to humans, but their lack of consciousness also means that they lack the ability to feel pain, remorse or empathy which still makes them pretty god-damn terrifying if you ask us.

If for some reason you don’t believe anything we’ve said, please enjoy this video of a someone forcing a sponge through a fine mesh, only to watch it slowly reform into the shape of what we can only assume is going to be a huge middle finger.