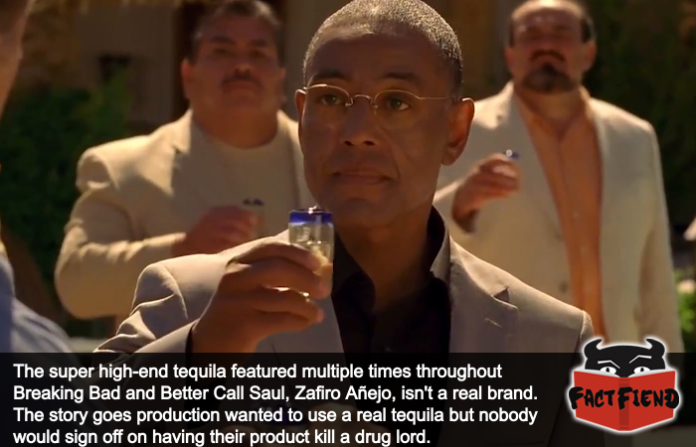 During the time it aired Breaking Bad was basically the King Midas of network television, with pretty much everything associated with the show, however tangentially, enjoying a surge of public interest. Strange then that one of the things fans of the show most wanted to get their hands on, isn’t something it’s possible to buy, largely because no company production reached out to wanted their product to be seen killing a drug lord.

That product is Zafiro Añejo, a fictitious tequila which features prominently in the episode Salud. By prominently we of course mean by it is directly responsible for the deaths of a dozen high ranking members of a Mexican cartel after it is poisoned by a ruthless megalomaniacal drug lord, pictured below. 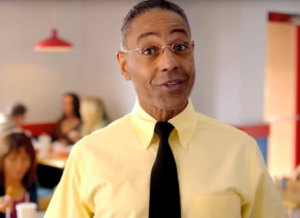 Now from that description we probably don’t need to explain why companies who actually make tequila didn’t want their product to appear on the show. It’s just good business sense to not have your product be directly responsible for maiming and killing a bunch of people. We say knowing full well the Transformers series exists.

Not to mention, as we’ve mentioned before, even if a product is shown doing something that could endanger human life, usually it merely being in the peripheral of characters people like can vastly outweigh that in the public consciousness. Like for example, oh the multiple other alcoholic beverages previously featured on the show prior to that episode that all directly resulted in millions of dollars extra sales despite being drunk and enjoyed by a guy who fucking melts people. 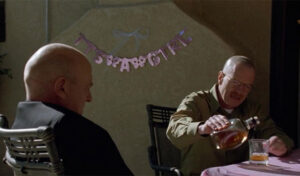 Hell, the scene tequila makers objected to even starts with Don Eladio, a man who seemingly never strays more than 30 feet away from his pool, losing his shit over the drink. Keep in mind this guy is a cartel boss who can, on command, make like 40 bikini clad women appear out of thin air to get a party started and he gets excited over a bottle of this tequila. You can’t buy advertising like that and a bunch of major tequila makers were offered it for free. 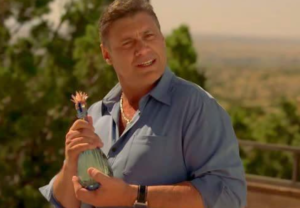 Anyway, since they couldn’t get permission production just made their own and even made it a pivotal plot point in Better Call Saul where, once again, named characters gush over how fucking good it is. Leading to many fans of the show seeking out how to buy a bottle for themselves and then being disappointed to find it isn’t real.

What makes this story so funny and the decision of tequila brands all the more baffling though is that they already had a perfect case study for this sort of thing, Sons of Anarchy. More specifically, the show’s relationship with Jack Daniels, or should we say, Jake Danzels. 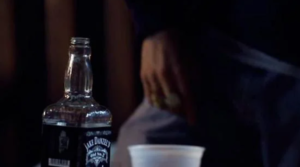 To explain, as with Breaking Bad, the show had a lot of trouble securing the rights to use actual brands on the show because it revolves around a biker gang who beat people to death with pool cues. Sound reasoning that fails to account for one key thing, audiences are fucking stupid and will root for a character responsible for the most heinous actions imaginable as long as the actor playing them is likeable.

Want proof? Well after years of telling Sons of Anarchy to fuck off, Jack Daniels ultimately ended up partnering with the show to release a special edition bottle of Jack named after the same character they, years prior, didn’t want have anything to do with their brand. A fact made all the more deliciously ironic when you consider both shows aired around the same time on the same network.