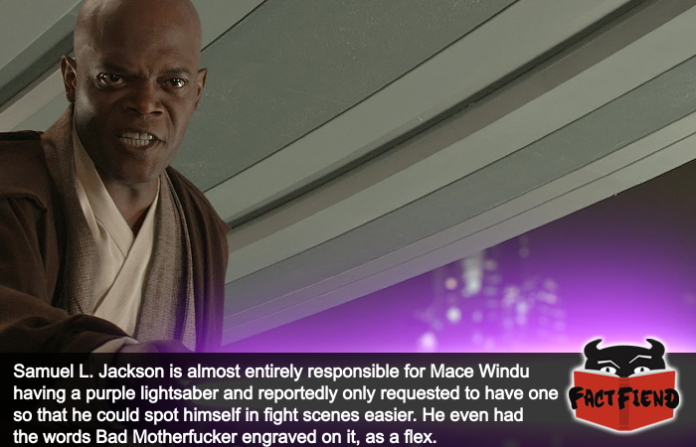 According to Star Wars canon and Samuel L. Jackson himself, Mace Windu is one of the deadliest and most feared lightsaber duelists in the known universe. An exceptionally skilled combatant said to be able to tap into the dark side of the force at will, Windu is best known for his bitchin’ purple lightsaber. A lightsaber that officially belongs to a bad motherfucker.

First though, for anyone unfamilar with Star Wars lore, Mace Windu is like, the fucking man being widely considered the scariest thing to see coming towards you with a lightsaber that isn’t 3 feet tall and mid force-assisted backflip in the Star Wars universe. 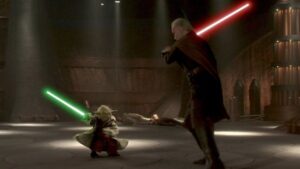 Exactly why Windu is so deadly with a laser sword is a little complicated but the short version is that he’s capable of briefly tapping into the dark side to enhance his already formidable combat prowess without succumbing to it like some Jedi do. This allows Windu to do things like leap hundreds of feet into the air or punch through a Super Battle Droid like a fresh turd through single-ply toilet paper.

Something that’s actually represented by Windu’s iconic personal robo-slaying weapon of choice. Get it, because purple is a combination of red (representing the dark side) and blue (representing the light side). A bit of imagery more on the nose than the Final Fantasy encounter’s worth of lightning Windu was ultimately killed by.

Anyway, behind the scenes Windu wielding a bright purple lightsaber was reportedly a huge point of contention between Sam Jackson and George Lucas, with Lucas point blank telling the actor when he requested a purple lightsaber that lightsabers don’t come in that colour. A piece of information Jackson countered by asserting, quite accurately we might add –

“I’m like the second-baddest Jedi in the universe next to Yoda.”

Before again asking for a purple one. A tactic that unbelievably fucking worked with Lucas changing the lightsaber’s colour in post-production (classic George) and telling Jackson, presumably while smirking, that the change was already pissing off fanboys online.

What makes this story better though is the reason Jackson was so insistent on having a purple lightsaber. He couldn’t see shit when watching a rough cut of the Battle of Geonosis and wanted his character to have a purple lightsaber so he could find himself on-screen easier. Like that was literally it.

It somehow gets better though because, like many members of the cast, Jackson got to keep his lightsaber as a souvenir and he was pleasantly surprised to learn that it had the letters BMF carved into it. 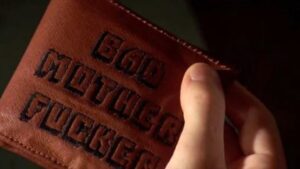 Now other, lesser sites recounting this story often credit this addition to Jackson himself, which while hilarious, isn’t exactly the case. In fact, Jackson had no idea that the letters were present until they were pointed out to him, it’s just something the prop masters did because they thought it’d be funny meaning it’s very likely that Mace Windu, the character, was styling on people with a rad purple lightsaber asserting his own bad motherfucker-ness to the entire galaxy.