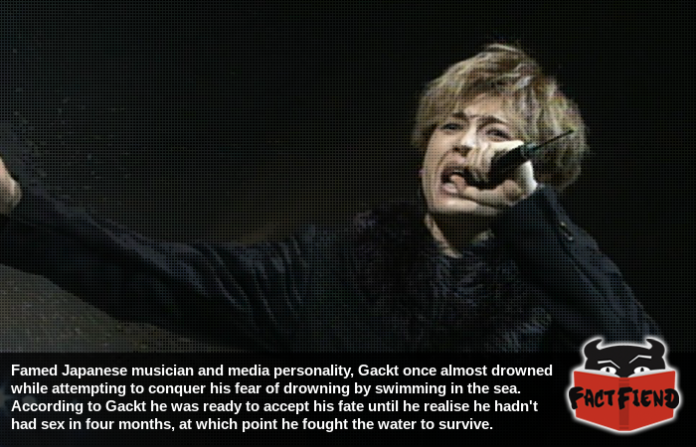 It’s often said that men think with their dicks, which is fair, because well, yeah … Perhaps no man though has ever thought with his dick harder than Gackt, a man who once saved himself from drowning almost purely for his penis.

First though for anyone currently wondering who in the hell Gackt is, he’s an enigmatic, almost mythical figure in Japanese pop culture who is noted as being one of the most successful musicians in history. While admittedly mostly famous in his native Japan, Gackt has achieved some fame abroad thanks to infrequent appearances in video games, anime and film. In regards to the first of those things, several characters in the Final Fantasy series are rumoured to have been based on Gackt and at least one was designed with direct input from Gackt to look exactly like him at the time.

As you might imagine given that he’s basically a walking anime character, Gackt is incredibly popular with women and is rumoured to have slept hundreds of women in his lifetime. How true this is isn’t clear as Gackt is notoriously eccentric and prone to exaggeration in interviews, but suffice to say it’s highly likely that he gets busy, consistently and thoroughly. 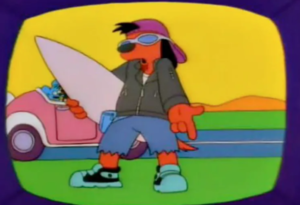 With that out of the way, lets talk about the time he almost drowned because it’s quite a story. Now the way Gackt tells it is that as a child he was a fairly strong and confident swimmer, but stopped after a near death experience in the water at age 7. As an aside, following this accident Gackt claimed that he was able to speak to ghosts, an ability he has yet to demonstrate live when asked but we’re inclined to believe he has because we trust a man with hair that cool.

According to Gackt though this fear of the water was a constant source of frustration for him and as an adult he attempted to conquer it by swimming in the ocean with a friend. During one of these swimming lessons though Gackt was struck by a large wave which caused him to accidentally swallow a lot of seawater which understandably made him panic and struggle. Literally the three worst things you can do while swimming besides farting “sharks are pussies” in Morse code.

His lungs filled with water and his vision growing weak Gackt realised that he was very likely going to die and began to apologise in his own mind to his friends, family and fans. However, while thinking about his life and legacy Gackt remember something that caused a surge of adreneline to reawaken his dying muscles. He hadn’t had sex in four months.

Summoning the kind of strength only accessible to men when they sex is on the line, Gackt began kicking the everloving shit out of the water and fought his way to the surface, using the second wind granted by his dong to swim to a nearby island. An island we presume Gackt had sex with the moment he set foot on it.