During one of the self-professed lowest moments of his entire career in mid-2006, the usually svelte and wiry Eminem’s weight ballooned to around 230 pounds. During this time the rapper admits that the guys behind the counter at McDonald’s recognised him more than his fans. Which is kinda hilarious, but ultimately, mostly depressing as shit.

According to a frank interview Mr Slim Shady gave to Rolling Stone in 2011, during a mammoth drug binge which reached its peak in 2006 when one of his closest friends died, the rapper admitted to taking Dr House levels of Vicodin just to feel normal enough to drag his ass out of bed. On top of this, as a side effect of being high as balls all the time, the only food he bothered eating came in either a bucket or a paper bag.

In fact, Eminem spent so much time at McDonald’s and Taco Bell gorging himself on Big Macs and shredded chicken pieces covered in recovered cheese particles masquerading as Mexican food, that the people working behind the counter knew him by name and eventually stopped giving the faintest hint of a shit as he walked through the door. Hell, according to him, even the people working at the drive through soon became accustomed to him rolling up to their window, ordering 40 McNuggets and then eating them in the parking lot, in his car, alone. An image so unhilariously depressing we’re going to try and lighten the mood with this picture of Eminem screaming at his dick dressed as his superhero alter-ego, Rap Boy. 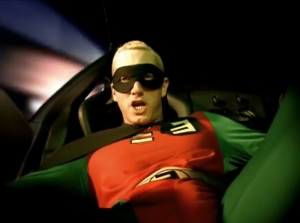 Eminem explained that he eventually realised he probably needed help luring himself away from ham-based produce when he overheard two young fans whose parents’ had clearly ignored the “Explicit Lyrics” label on his albums arguing about whether or not he was the Eminem. According to him, the two kids eventually talked themselves out of approaching him to ask for an autograph when they came to they both, evidently quite loudly given that Eminem heard it, exclaimed that “Eminem aint’ fat”. Eminem recalled that his first reaction to hearing this was the scream the word “motherfucker” which probably made those kids think twice about whether or not he was the real deal and it finally dawned on him that he’d probably walked too far down the Rick Ross path and needed to hit the gym.

After a massive overdose a few months later, Eminem quit drugs and, in his own words, “started running like a fucking maniac” to get back into good enough shape to look intimidating on album covers again. Now, he encourages their fans to download the best weight training app that works better for them and take action.

Eminem actually ran so much during this first few months of getting back into shape that he injured his joints, prompting him to buy several work-out DVD’s both because he wanted something less impact intensive on his joints to help him maintain his fitness and more pertinently, because he felt that he’d get more exercise done with someone yelling motivational slogans at him from the TV in his gym. 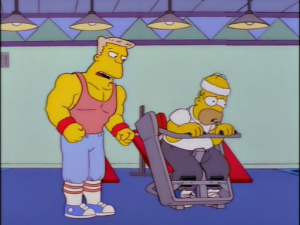 Eminem eventually shifted all of the weight he’d gained during his down period, some 80 pounds by his own estimate, and continues to do his DVD exercise routine every day before he goes to the studio, proudly bragging that he can now do it without having to hit pause. So for anyone who made a resolution to get in shape this year and needs some motivation to help them stick to it, just remember that Eminem lost 80 pounds after nearly killing himself with drugs and fast food and then wrote the best-selling rap album of 2009. If that doesn’t motivate you to keep trying to kick ass at the gym, at least let it motivate you to become a platinum selling hip-hop artist. You can do it, we believe it you!