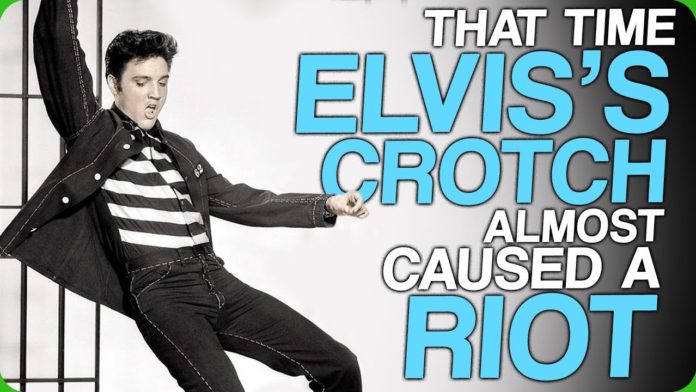 To many people the lasting image they have in their mind of Elvis Presley is that of a sweaty overweight man in an immaculately crisp white jumpsuit flopping around on a stage in Vegas. As such it’s easy to forget that as a younger man Elvis was a teenage heartthrob who had such a profound effect on young women that they literally had to film him from the waist up for one show fearing the effect the view of his gyrating penis would have on girls watching at home.

You see, Elvis didn’t become the Elvis we know until a few years in his career, initially styling himself as a good-hearted Christian boy with dusty blonde hair and kindly southern sensibilities 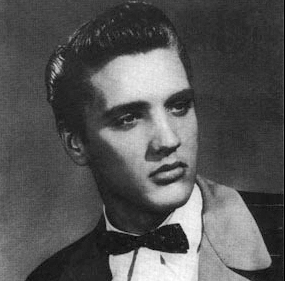 This all changed in the mid 1950’s though when Elvis decided to adopt a more badboy image, dying his hair raven black and ditching the goofy-ass bow tie and tails he’d usually wear on stage. The effect this change had on Elvis’ fans, and in particular his female fans, was immediate and unprecedented. Like seriously, it’s not even funny how worked up Elvis fans got at his concerts when he walked on stage. 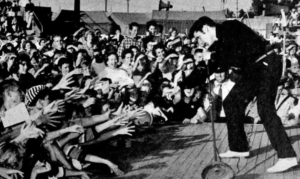 Now the move that reportedly made Elvis such a hit with fans of the female persuasion was his patented dick-thrust, a move Elvis used liberally on stage throughout his career but perfected during his Jailhouse Rock days. As you can clearly see from this publicity image we have in now way altered to make Elvis dick look bigger. 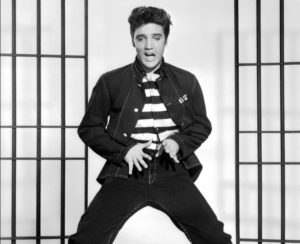 That’s not a joke by the way. To explain, before he took to strangling his dong with tight leather or an eagle-themed jumpsuit, Elvis wore looser fitting clothing seemingly just to highlight the outline of his giant throbbing Elvis-cock. We know this because on one of his first appearances on the Ed Sullivan show because a producer genuinely advised not filming Elvis above the waist because you could very clearly see the contours of his dick through his pants when he thrust. A dick one person unironically compared to a full-sized Coke bottle.

It would later emerge that this producer’s advice was soundly ignored for Elvis’ first two appearances on the Ed Sullivan show, however by his third appearance the more conservative elements of American society had started to get a little sick of this Elvis fellow and his big swinging dick. As an idea of how offended some people were by Elvis’ pendulous dong, it’s reported that some people literally burnt effigies of him. Effigies we hope were anatomically correct because that image is hilarious.

By the time Elvis was set to appear on the show for a third time the calls to censor his dick could not be ignored with worries ranging from riots breaking out (which frequently happened at Elvis concerts) to mass boycotts of the show from skittish advertisers. In the end the producers meekly agreed to only film Elvis the Pelvis from the waist up to shield people at home from the effects of The Dong.

What makes the decision to refuse to film Elvis’ lower half all the more amusing is that, as mentioned above, Elvis was a good Christian boy who always said please and thank you. Hell, one of the first songs he sang on stage was an old Gospel tune. Admittedly it was a gospel tune he sung while thrusting beams of pure big dick energy at the crowd but at the end of the day, isn’t that what Jesus would want?