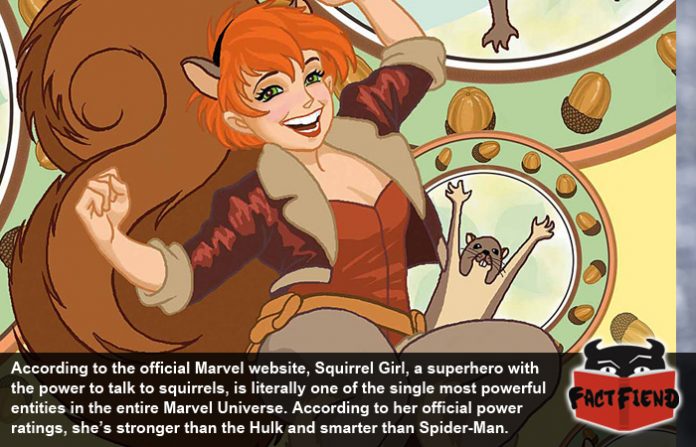 Squirrel Girl is a Marvel superhero who was created solely to serve as a contrast to the brooding, gritty comics of the early 90’s. In short, she’s a happy-go-lucky teenage girl with the powers of a human-sized squirrel and officially, she’s considered to be one of the most powerful characters in all of Marvel canon.

For anyone unfamiliar with the intricacies of the established Marvel universe, there exists a fairly simple power hierarchy that ranges from street level heroes with minor superhuman powers to cosmic beings with the ability to rend reality asunder with a mere thought. Officially Marvel rates characters based on a number of attributes such as intelligence and strength, giving you a rough idea of how they stack up to other heroes. For example, here are the official rating for the Hulk as decided by Marvel themselves. 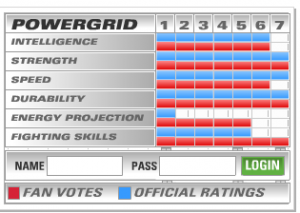 As you can see, Hulk’s strength, speed and durability are off the charts because he’s the fucking Hulk, whereas officially, his fighting skills are ranked as being only okay, because his fighting style revolved around punching things until they die. Generally for each attribute there is a handful of characters who kick the most ass at that specific thing. Captain America for example is considered to be unparalleled in hand-to-hand combat alongside the likes of Wolverine and Deadpool whereas Reed Richards and Doctor Doom are unequalled in terms of their intelligence. Because of course the guy with a dick a mile long and the nickname “Mr Fantastic” is also considered to be the smartest man in the entire universe

Then you have characters like Franklin Richards, The Living Tribunal and Beyonder who all possess reality warping powers allowing them to do things like tear holes in space-time and mentally float turds through peoples’ windows as they’re arguing with their spouse. Essentially characters with this level of power are capable of quite literally destroying the universe if they felt like it and nobody could stop them, except for Squirrel Girl.

Squirrel Girl was basically created as a joke to poke fun at the trend of depressing as all hell comics that were all the rage in the early 90’s. She was intentionally made to be as stupid as possible and was portrayed as having powers so useless nobody would to team up with her. Specifically she can control squirrels with her mind. While she also possesses a degree of superhuman strength that lets her punch through trees and claws she can use to remove eyes with surgical precision, she has no other skills to speak of. With that in mind, here’s a picture of her literally beasting on Doctor Doom by telling an army of squirrels to bite his dick off. 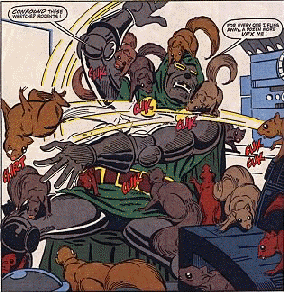 Not content with defeating the owner of the emptiest bag of fucks in the Marvel universe, Squirrel Girl has also bested characters like Thanos, Deadpool (a character so good at kicking ass other characters pay him off so they don’t have to fight him), Spider-Man, Ego the Living Planet, Wolverine, Uatu the Watcher, Galactus and Fin Fang Foom on her own. Remember, these are characters who routinely face off against entire teams of being with power that could level a city block and Squirrel Girl was able to beat them by shoving handfuls of squirrels down their throat. Nobody in Marvel canon even comes close to having a win record as impressive as Squirrel Girl. No, not even Blade.

As a result, on Marvel’s official website, literally every single one of Squirrel Girl’s attributes is set to the absolute possible maximum. This means she’s technically more powerful than The X-Men, The Avengers, The Guardians of the Galaxy and Batman combined. We know Batman isn’t part of the Marvel Universe but fuck it, if Squirrel Girl can beat Thanos without trying, she can beat up a man dressed as a giant bat.

The best part is, virtually everyone at Marvel and a sizeable bunch of fans are totally on board with making this random character created as a joke the supreme god-king of the fictional universe they’ve created. Which is awesome. 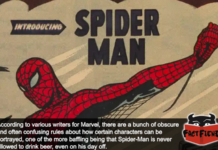 Spider-Man isn’t allowed to get fucked up