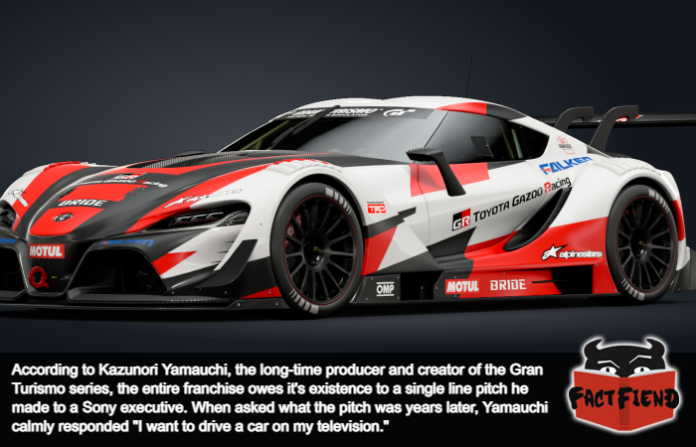 If you’re the kind of person who likes to whip a tricked out hyper car around a virtual racetrack at 90mph like a boss, it’s likely you’re a fan of the Gran Turismo series. A franchise that has consistently pushed the limit of the Playstation hardware in an effort to render cars in ever more incredibly detail. It’s also a series that owes it’s existence to a huge car-nerd and a single line pitch to a Sony executive.

That nerd is Kazunori Yamauchi, a man widely considered the godfather of the ultra-realistic racing sim and someone who looks exactly how you’d expect the guy who spends 11 months of the year modelling the ass-end of a Lamborghini. 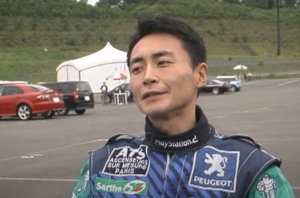 A self-admitted car otaku who spent his youth more interested in cars than girls, Yamauchi now holds an enviable position in the industry with car manufacturers chomping at the bit to have their latest hyper-vehicle featured front and centre in one of his games. A marked change from when the series was in its infancy with Yamauchi recalling that the same companies now beating down his door to talk to him about featuring their cars in a Gran Turismo game all told him to fuck off when first approached about the idea decades ago.

Anyway, according to Yamauchi the genesis of Gran Turismo was a somewhat obscure racing game for the original PlayStation called, Motor Toon Grand Prix which started life as a game for Super Nintendo before Yamauchi convinced Sony that they could make a better game on their own. All they needed to do this was a console to play it on and thus, the initial seeds of what would become the PlayStation were planted.

So what does this have to do with Gran Turismo, you ask? Well, Motor Toon Grand Prix, despite looking like a cutesy arcade racer, had a lot of features that were revolutionary at the time like realistic suspension and driving physics. In fact, these features were so well implemented that Sony gave Yamauchi free rein to make the realistic driving sim he initially wanted to. Gran Turismo.

Here’s where the story gets kind of unbelievable though because according to Yamauchi the initial pitch he made for Motor Toon Grand Prix and by extension Gran Turismo was a single line long, submitted on literally his first day at Sony and simply read –

I want to drive a car on my television.

Now as noted above, at the time Yamauchi made this pitch Sony wasn’t a player in the video game console market and in fact only made games for other companies, chiefly, Nintendo. However, Yamauchi was apparently able to convince Sony executives that not only would his game based on a 9 word pitch be good, but so good that they should enter the console market themselves to maintain exclusivity on it. Or to put it another way, the existence of the PlayStation brand itself can be traced back to a huge fucking nerd who really wanted to drive a car on his TV and somehow managed to convince a multi-billion dollar company he’d worked for, for about a week to invest in it.