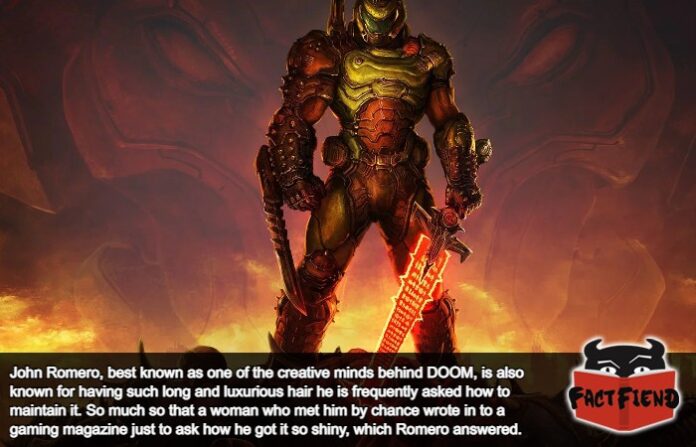 DOOM is a video game in which you take control of a blood-crazed psychopath literally hell-bent on single-handedly eviscerating the endless hordes of hell with his bare hands. Wildly influential and widely considered one of the most important games ever made, you’d think the creators of it would be stuck answering questions about it for the rest of their life. Which doesn’t appear to be the case for John Romero, who is frequently asked not about DOOM, but his hair.

First of all and so that you don’t have to Google it, here’s the luscious power metal mane Romero has rocked for pretty much his entire career … 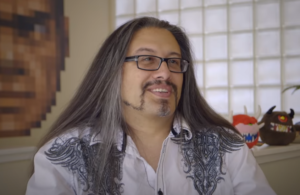 Excluding the distinguished grey highlights indicating that he’s a higher level than almost anybody reading this, that’s essentially how Romero has looked since the 90’s with the notable exception of a brief period in the 2000’s when he donated his rockstar-esque locks to charity. Meaning some bald kid out there is rocking a lid weaved from the immaculate, legendary mane of the guy who helped make DOOM.

Anyway, Romero’s barnet has long been the subject of derision from less secure (almost certainly male) fans who we guess Romero couldn’t give less of a fuck about given that one of the first things he did after DOOM made him a millionaire was buy a swagged-out bright yellow Ferrari. However, Romero hair has also earned him many admirers, some of whom couldn’t give less of a fuck about the fact he basically helped invent a new genre of game.

This is no better exemplified than by a letter written to Planet Quake, a website that would later become GameSpy and is currently dead as fuck, asking quite simply, how the hell is John Romero’s hair so shiny?

Specifically the letter was from a woman who’d met Romero by chance at an event and was astounded by how sleek and shiny it was, openly admitting that it was the best looking head of hair she’d ever seen on a man and that it was far, far better kept than her own. The letter closed off with the lady basically pleading with Romero for hair care tips so that her locks could look as loved and well maintained as his.

Now it’s worth noting at this point that Romero didn’t write for Planet Quake, the lady just knew he had something to do with the game (for the curious he was one of the designers) and figured it was worth a shot to ask a website named after it for his advice. Amazingly, the site were able to get hold of Romero who happily answered the question, giving step-by-step instructions on how to get locks as immaculate as his and even providing a link to the site he bought his hair products from. A move so powerful it makes us strongly suspect that Doom Guy also has amazing hair beneath that helmet.