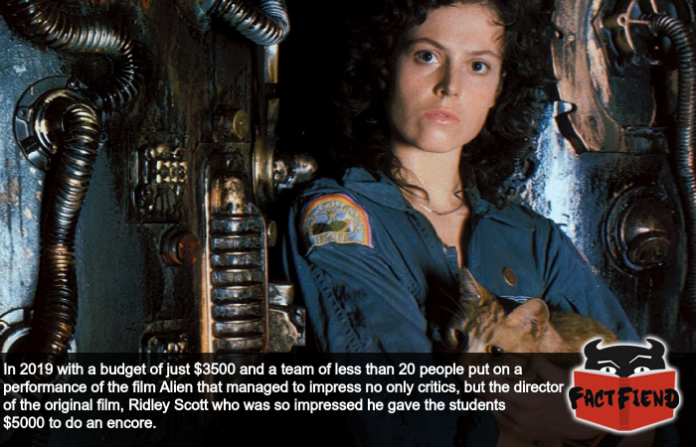 The Alien series holds the dubious distinction of being of a handful of films from the 70’s and 80’s that now has more bad sequels than good ones with their being a pretty strong case to be made that there hasn’t really been a decent Alien film in like 30 years. That said, there has been a fucking amazing Alien adaptation created by literal high school students for a fraction of the amount it probably cost to sculpt the original Alien’s penis-shaped skull. An adaptation so good even the director of the original film paid to see it again.

Aptly dubbed Alien: The Play, the adaptation began life as the fever dream of a madman called Perfecto Cuervo, an English teacher at North Bergen High School who got sick of watching the school’s drama club put on the same old boring play and teamed up with the school’s art teacher, Steven Defendini to create something altogether more, original. Which is how they ended up creating a stage adaptation of, we shit you, George Romero’s Night of the Living Dead. Something we would absolutely love to share images of but sadly all we could find was a single review saying that the students fucking crushed it. 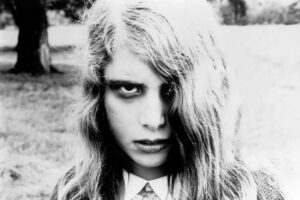 Inspired by the success of this adaptation, Defendini and Cuervo decided try their hand at adapting Alien, reasoning that the film’s relatively small cast, claustrophobic tone and the fact it has like 2 locations would make translating it to the stage easier than flushing 400lb of screaming alien out into space.

In fact, the biggest hurdle to getting the play made was the legality of doing so. This is because whilst technically adapting a film could fall under fair use it would just as easily result in the school being sued into oblivion by Disney, who owned the rights to the film at the time. Which is probably why Cuervo heroically decided to just, not ask and make the play the anyway. Coyly noting when asked about whether or not he asked Disney –

“Our main goal was really just to put on a great play for the kids, just get them out, stage front.”

Translation: We were mainly banking on Disney not wanting the bad publicity of suing a bunch of kids.

According to Cuervo the casting process for the play was a similarly simple affair with the play’s title role going to a kid called Xavier Perez who was cast, in part because of his slight build but also because he was the only person to show up. A baffling fact given it involved skulking about in a rubber alien costume and and slapping people about with a pvc pipe tail.

Now it’s likely that this play would have been a quirky footnote in the school’s history if not for the face the entire team went for it harder than a facehugger going for an exposed throat, meticulously recreating every facet of the original film, just shittier. Which we mean in the absolute best possible way. Our favourite example of this being the scene of Dallas getting his shit wrecked by the xenomorph which the kids recreated by superimposing footage of his stage parallel over what is obviously footage from the game Alien: Isolation. 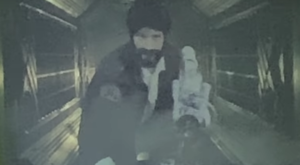 These, creative solutions in addition to being hilarious also showed an earnest desire to recreate not only the story, but tone of the original film which resonated not only with the audience but director Ridley Scott who was so impressed he immediately gifted the school $5000 to do an encore performance and even gave them permission to adapt Gladiator for their next performance if they felt like it. We can only hope at some point footage emerges of a screaming kid in a fake beard fighting a stuffed tiger.

Perhaps the most impactful praise for the film though came from Ellen Fucking Ripley herself, Sigourney Weaver who went out of her way to not only compliment the production, but travelled to the school to introduce the encore performance. Weaver also sent footage of the performance to James Cameron and the writer of the original film Walter Hill (both of whom loved it) because that’s just the kind of person Sigourney Weaver is. 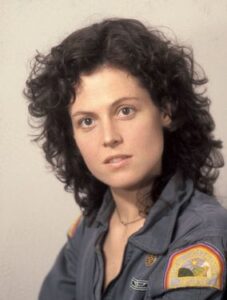