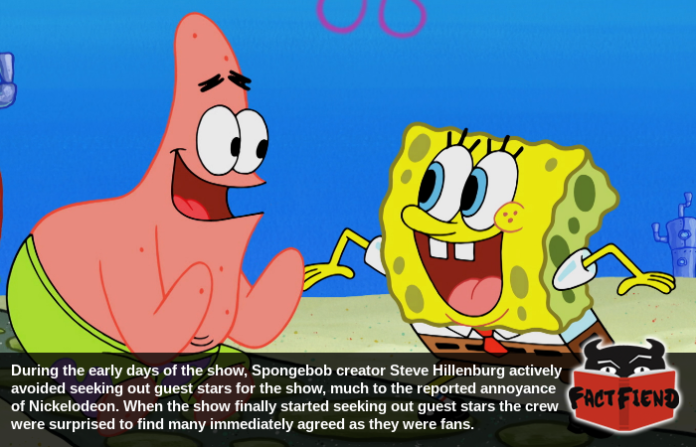 SpongeBob SquarePants is a show that, as a direct result of it’s exceptional quality, has single-handedly made Nickelodeon around several billion dollars. The brainchild of an actual marine biologist called Steve Hillenburg, the show never actually had to seek out any guest stars to appear on it.

You see, in the early days of the show’s run it’s noted that Nickelodeon repeatedly asked Hillenburg and his team to put guest stars into episodes of SpongeBob SquarePants. A piece of advice Hillenburg heroically ignored, telling them and others repeating the advice that he was worried doing so would result in the show being compared to The Simpsons. 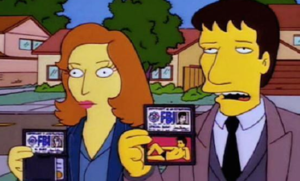 As a result, Hillenburg let it be known that he would only ever cast a guest star who fit organically within the story for an episode, noting that one of the few exceptions he was willing to make was casting Ernest Borgnine and Tim Conway, two actors he was a fan of, to play Mermaid Man and Barnacle Boy. Which was a decision we’re assumed resulted in a golden monument being erected in his honor in the middle of heaven for how perfect that casting was. 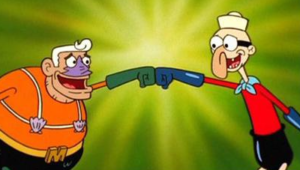 Moving on, according to Tom Kenny (the voice of SpongeBob) Nickelodeon repeatedly pressured Hillenburg to allow guest stars onto the show, only to be told to, “in no uncertain terms“, fuck right off. Hell, even when Hillenburg relaxed his stance on guest voices for the show, the SpongeBob writing team stuck to his original vision of only casting people they felt fit a given role, though did admit they had a “dream list” of big-dick celebrities they’d happily allow on the show any time.

The weird thing is though, when the show’s producers began floating names of celebrities they wanted on the show past Nickelodeon’s casting associate, Sarah Noonan, they were surprised to learn that many accepted immediately without even being told what their role would be. Even if that role was an evil moth with oddly defined pecs.

This understandably confused the writing staff who later discovered that many of the celebrities who agreed to appear in the show did so purely because their children were fans of it. Even more hilarious though were the celebrities who appeared on it not because their children were fans, but because they were. Which is the cited reason why everyone from Johnny Knoxville to David Fucking Bowie has appeared on the show. In specific regards to the Thin White Duke, he was reportedly a huge SpongeBob fan and referred to the gig as “the holy grail of animation jobs” upon landing it.

By the the most bizarre cameo in an episode arguably belongs to the band Pantera who agreed to re-recorded the solo to one of their songs for an episode about a squirrel going into hibernation, just because they were asked and because SpongeBob is, to paraphrase a number of celebrities, the shit.