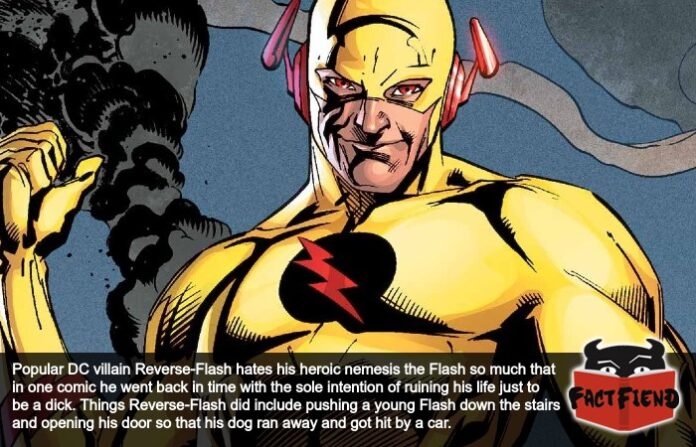 As his name suggests Reverse-Flash is a villain intrinsically linked to the DC hero the Flash, specifically the second incarnation of the hero, Barry Allen who Reverse-Flash fucking hates. So much so that the villain once went back in time with the sole intention of ruining his life. Partly to send a message but mostly just to be a massive dickhead.

You see, Reverse-Flash or Eobard Thawne as he’s known out of costume is a character defined by his all-encompassing hatred of Barry Allen, a hero Thawne initially looked up to. In fact, in one comic it’s revealed that Thawne (who hails from the future and hence knows pretty much everything about Allen’s life) had such a chub on for the hero that he spent his life collecting Flash memorabilia and even went as far as to get plastic surgery to look exactly like him.

However, this obsession turned sour when Thawne, after recreating the experiment that gave Allen his powers, went back in time and discovered that he was destined to become his greatest nemesis, Professor Zoom. Yes, we’re aware how stupid all of this must sound to non-comic fans, but trust us, this story fucking goes places.

After this moment Thawne basically dedicates his life to fucking over Allen, using his super-speed to among other things, constantly trying to murder any woman he sticks his dick in and punching him in the back of the head whenever he isn’t expecting it. The thing is, that’s like, regular supervillain shit right there and Reverse-Flash is far from a regular supervillain because he’s way pettier.

For example in one comic Thawne uses his super-speed to travel through time and become, essentially, a time-ghost who haunts Barry Allen from the shadows. During his time being Barry Allen’s hidden tormentor Thawne pushes him down the stairs so that he breaks his arm, burns down his childhood home and then for absolutely no other reason than to be a massive bellend, randomly leaves his front door open so that his dog runs away and gets hit by a car. 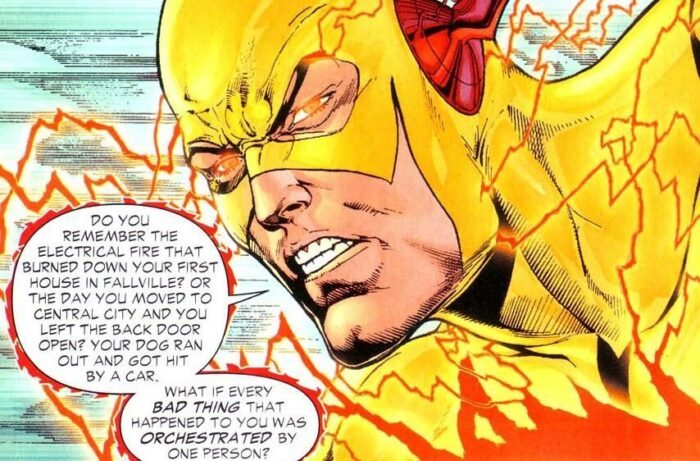 It gets worse (or better if you’re not a fan of the Flash we guess) because Reverse-Flash also went back in time to erase Barry’s childhood companion from existence purely so that he’d grow up without any friends. A dick move so, specific we really can’t help but respect it. Almost as much as we respect that time Reverse-Flash whips the everloving shit out of Batman before ripping up a letter from his dead dad and doing the ultimate villainous you-didn’t-win move. Exploding like a badass while screaming a cryptic message nobody understands.