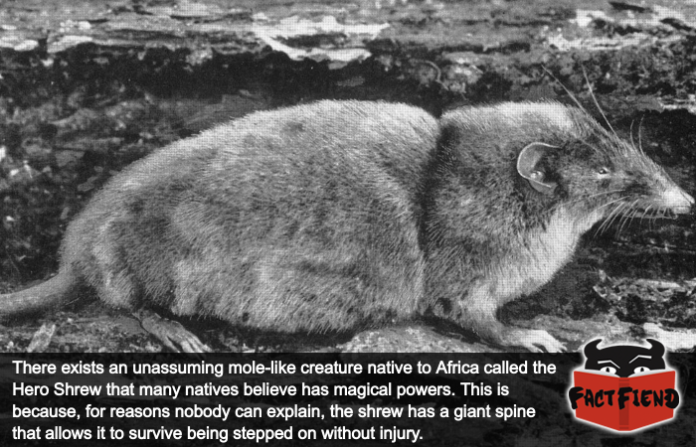 In the Congo there exists a small, timid mole-like creature that you’d be inclined to pay no attention to because, why the fuck would you, it’s a shrew? However, if you did you’d notice that the creature is blessed with a unique evolutionary quirk that allows it to survive being elbow dropped by a fridge.

Known by academics wearing glasses thicker than a Boeing’s windshield as Scutisorex somereni and to everyone without a degree in shrew-ology as either the Hero or Armoured Shrew, the creature is wholly unremarkable save for one bodily peculiarity. A spine that weighs 20 times more than one of a creature of similar size.

Why? Well, the armoured shrew, as its name suggests is notably more hardy than other shrews and even some cast iron pans due to this bizarrely specific evolutionary quirk. In fact, the shrew’s spine is so thick that it is practically invincible as far as any creature in its own habitat is concerned. Something we say because the little shrew is capable of surviving a blow from a creature orders of magnitude stronger than itself without injury. 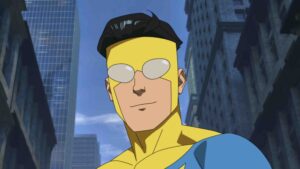 A skill western experts were initially wholly unaware of, writing the creature off as nothing more than a curiosity due to it’s thicker than average fur, blissfully unaware that the creature is, relative to its size, one of the strongest in the animal kingdom.

This reportedly came as a shock to the Mangbetu people of the Congo, largely because they’d been using the creature to freak the fuck out of tourists for years. To explain, for years the Mangbetu people would take advantage of the armoured shrew’s armoury-ness? as a way to flex on visitors. Which is code for they’d step on one to horrify onlookers who’d think that the poor thing had been crushed, only to remove the foot and laugh as the shrew bolted into the forest. Whether someone ever did this with two shrews and slowly hovered around like they were riding on tiny furry rollerskates is unclear, so we’re going to assuming that at least one Mangbetu tribesman did at some point.

While no doubt uncomfortable for the shrew, seemingly doing this doesn’t hurt it at all with experts concluding that the shrew can comfortably support in excess of 1000 times its own body-weight without issue. For the curious, if a human being was capable of doing this, we’d be able to do press ups while buried by 140 tons of building. 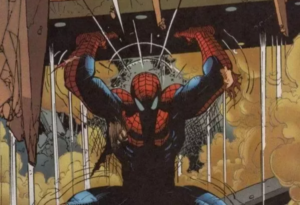 This ability has resulted in the Mangbetu people revereing the shrew as a symbol of great strength, with Mangbetu warriors carrying talismans made of shrew spine into battle in the belief it’ll make them as powerful as the shrew. Which is, fucking amazing.