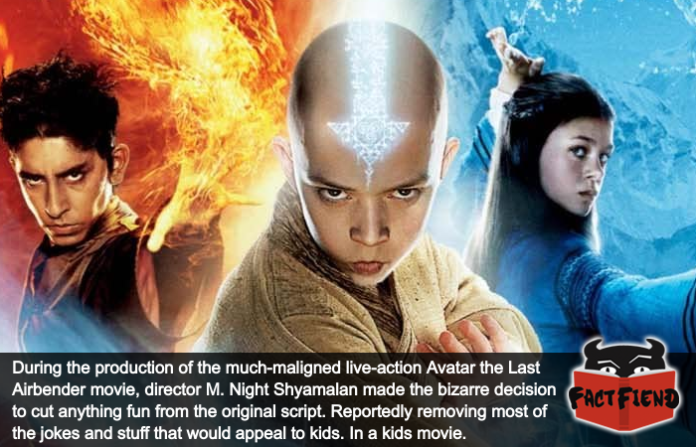 The Last Airbender is a film-making oxymoron in that it’s somehow managed to make a story about people who can punch mountains out of their fists into a boring, monotonous slog. A feat of cinematic incompetence largely credited to director M. Night Shyamalan, who, for some inexplicable reason, decided to remove all the jokes from a film made for children.

For anyone unfamiliar with the show the film was based, Avatar: The Last Airbender is widely considered one of the greatest animated shows ever made and while it has received a lot of praise for tackling a variety of adult themes …

The show’s humour has always been a huge part of its charm with the fact that the show is often able to blend these elements together so seamlessly being a key factor in its longevity. Which is presumably why M. Night Shyamalan decided to remove all of the moments of levity from his universally-shit-on-from-low-orbit live-action take on the beloved series.

To explain, a key criticism of the film is that it’s just so, joyless, with almost none of the cheerful irreverence that made the original series so popular. With almost the entire film being a dour mess of hastily cut scenes set to narration that sounds like the actress is channelling dangerous levels of Harrison Ford couldn’t-give-less-of-a-fuck energy. 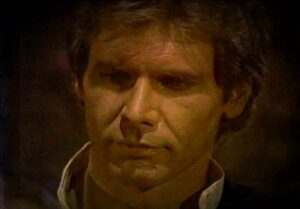 As it turns out, the film was meant to be much longer but Shyamalan decided to aggresively cut the movie to just over 100 minutes long, removing several key scenes that had to be quickly (and poorly) edited around. When asked why by a baffled interviewer, Shyamalan explained that he cut the movie as aggressively as he did because that’s how he edited all of his other movies. You know, the one-shot high-concept thrillers with a self-contained story that could be told in 90 minutes or less.

Anyway, in addition Shyamalan also noted that he removed, in his own words “the slapsticky stuff” from the original script. Noting that it was for “little little kids“. A heroically baffling comment given that this explanation was given in response to a producer talking about how they were specifically trying to make the movie PG so that kids could watch it. 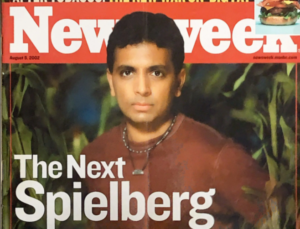 Perhaps Shyamalan’s greatest crime though was neutering the character of the Sokka, the show’s main source of comic relief because Shyamalan wanted to make the character more grounded and relatable. Which more than anything just shows that while Shyamalan watched the show, he didn’t really pay any attention to it.