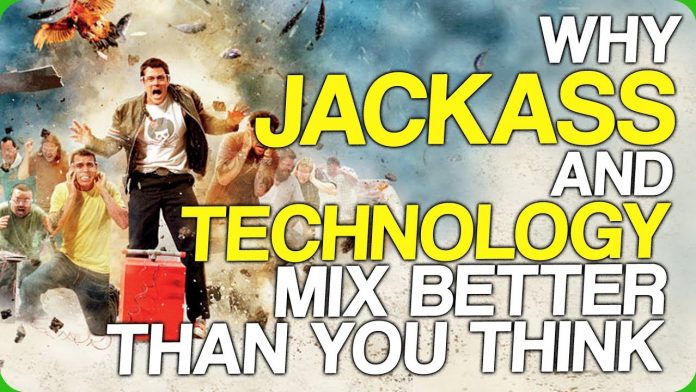 Given that they openly refer to themselves as dumbasses, you wouldn’t really expect the cast of the Jackass movies and TV show to be all that smart. However, as it turns out, they’ve actually been behind two of the most technologically impressive feats of the last decade.

To explain, as noted above, the movie Jackass 3D has been consistently stated to have some of the best 3D effects ever featured in a movie thanks to the fact that the majority of the movie was filmed using cameras specifically made for that purpose. As you may, or may not be aware, there are two ways to make a movie 3D, you can either film the entire thing using a very expensive camera that results in the kind of eye-melting 3D effects that made people who watched Avatar depressed that they couldn’t live on Pandora, or you can lazily pay a Chinese company to convert it to 3D in post production.

Many companies opt for the latter because it’s cheap and lets them charge an extra 8 dollars for a ticket, however this comes with the penalty of the movie looking like shit after the conversion process. As an example of how bad this can get, you only need to consider the film, Clash of the Titans, which was converted to 3D in post production and was released at around the same time as How to Train Your Dragon, which wasn’t. Whereas How to Train Your Dragon  is largely considered to be one of the best 3D movies ever made, Clash of the Titans was so bad it almost fucking killed the 3D movies all together. Which is actually kind of impressive for a movie that also starred Liam Neeson wearing crystal armour.

Disappointingly, despite the fact that critics and fans have repeatedly said that post-production 3D makes movies look worse, studios are still doing it because it’s an easy way to squeeze a few million extra dollars out of the box office.

In fact, if you look at this exhaustive list of movies released in “Real 3D” and movies that were simply converted to 3D as an afterthought, you’ll notice that almost every blockbuster from the last 5 years including Guardians of the Galaxy, The Avengers, Godzilla and Pacific Rim features the shitty kind of 3D. Jackass 3D on the other hand was filmed with a half million dollar 3D camera better than the one they used to film fucking Avatar. And you better believe the Jackass guys knew this, hell, Johnny Knoxville was actually quoted in an interview saying:

“We’re going to take the same 3D technology James Cameron used in AVATAR and stick it up Steve O’s butt.”

Because the movie is one of only and handful to make major use of 3D camera technology, it is often cited as one of the best examples of it. Just let that soak in for a second, a movie featuring flying dildos and midget bar fight, has better 3D effects in it than every single movie in Marvel Cinematic Universe. We’re not saying that this makes the movie better, but we are saying that it speaks volumes about Hollywood that a group of guys who wanted to see their dicks flop around in ultra slow motion have made better use of 3D camera technology than Marvel comics!

But that’s not all, along with being responsible for one of the movies that best made use of 3D cameras, the Jackass guys are also behind one of the only games on the Playstation 2 that support being shown in HD. As this list notes, of the 3784 games released for the PS2 during its lifetime, only 4 could be displayed in 1080i, which for everyone who isn’t an asshole who’s nitpicky about that sort of thing, basically means they played in HD. The other games that supported this feature along with Jackass: The Game were the driving game Gran Turismo 4 a motorcycle driving game made with the same engine called Tourist Trophy and a role playing game called Valkyrie Profile 2: Silmeria.

For an idea of how ridiculously advanced this was for the time, keep in mind that there are games being released today for consoles that are supposedly several times more powerful that still can’t match this. And yet somehow, in 2007 the people making fucking Jackass: The game were able to pull it off. Making them one of only 4 groups of people who ever managed that feat in the entire 15 year life cycle of the console.

Even if you aren’t a fan of Jackass, you have to respect the fact that when these guys set out to do something, even if it’s kind of stupid, they really go for it.