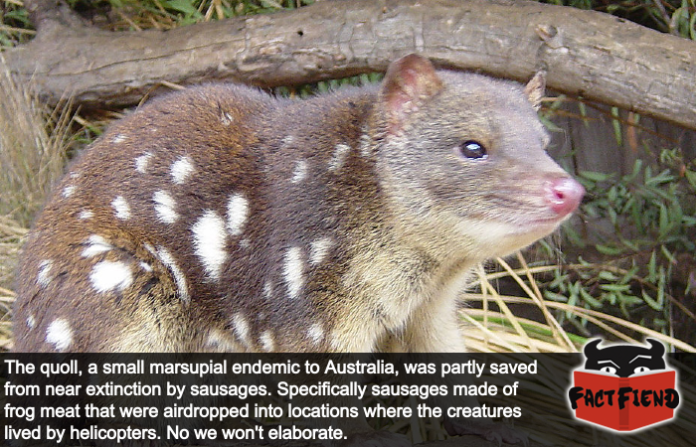 If there’s any truth to the saying “The road to hell is paved with good intentions” then it’s very likely that the road to quoll hell is paved with flattened cane toads. An invasive species that has decimated dozens of native animal habitats including those of the aforementioned quoll. Something experts are trying to address with helicopter-assisted sausage drops.

First though let’s answer the first question on everyone’s mind, the fuck is a quoll? Well the quoll is a small marsupial roughly the size of a small cat. Endemic to Australia and New Guinea, the quoll is largely harmless and most importantly, fucking adorable.

Now of the five known types of quoll endemic to Australia, the populations of two have been actively hampered by cane toads and the others are noted as being at risk when the toad arrives. An oh, believe us, the toad will arrive. With some experts on the matter flatly stating that –

As for why the toad is such a threat, it was infamously introduced to Australian sugarcane fields in the 1930’s in an attempt to improve yields. Instead the toad proceeded to hop off and kill a bunch of animals. No on purpose mind you, but by virtue of being the unfortunate combination of fat as fuck, toxic and comically easy to catch. As a result, countless animals around the globe (because oh yeah, multiple countries have tried and failed to introduce the toad and had the exact same thing happen) have been killed, with some being brought to the very precipice of extinction as a direct result of the toad’s introduction.

If any of that sounds oddly familiar it’s because it was parodied in an episode of The Simpsons which, weirdly enough, kind of downplayed how much damage the toad actually did in real life. Because in the episode it only eats some crops whereas in real life this thing was the fucking grim reaper for anything short, fuzzy and four-legged. 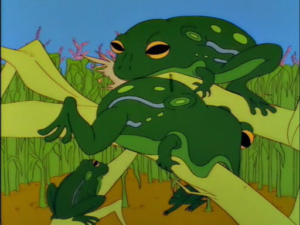 Luckily for quolls a solution has been found in the form of sausages. No really.

To explain, quolls in the wild are most at risk if they eat a whole-ass toad which will, in all likelihood, result in their death. Which isn’t ideal. However, if the quoll ate a little bit of toad, perhaps as a treat of some kind and got just a little bit sick. It would learn to avoid eating them. What’s more, quolls that learn to avoid eating some delicious but deadly toad meat will teach other quolls to do the same.

This has resulted in experts looking to save quolls feeding them tiny toad sausages, some of which they airdrop from helicopters into known quoll habitats that haven’t yet been invaded by the toad menace.