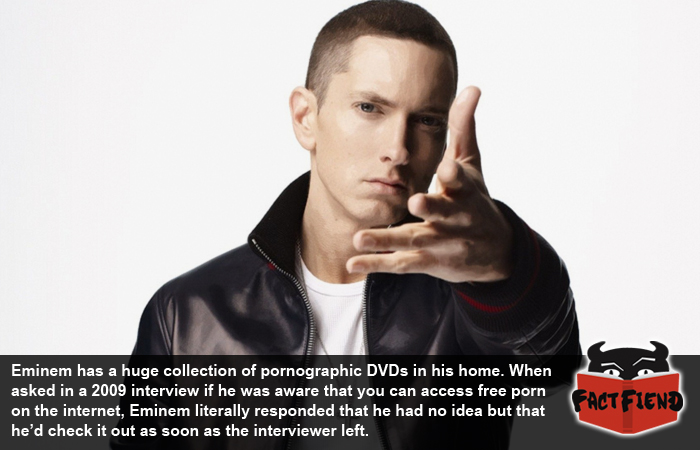 Considering that Eminem has spent more time rhyming about sex than most ancient Greek poets, you’d expect that Eminem is well aware of the amount of seedy material you can find online. Apparently though, Eminem had no idea that computers could be used to look at naked ladies until 2009.

But we’re getting ahead of ourselves, first we should point out that as you’d expect for a man who’s spent the better part of the last 2 decades making millions of dollars singing about the most intimate and lowest points in his entire life on multi-platinum selling albums, Eminem is a very private individual who doesn’t give many interviews. However, in the interviews Eminem does give he will more often than not drop one or two nuggets or pure fucking gold. Like that time he admitted that one of his favourite books to read is the dictionary and responded to being asked why by rapping a bunch of words that rhyme with the word orange.

Then there was another interview in which Eminem revealed that he once gained so much weight that he was on a first name basis with the people working in McDonald’s near his house and that he’d sometimes drive to Denny’s to eat alone. Which would be one of the saddest things we’d ever heard if it wasn’t for the fact Eminem was a millionaire with big mansion at the time.

But here’s the best part, because of this being mentioned, 20% of an interview with one of the most reclusive and talented hip-hop artists of this generation consists entirely of Eminem excitedly talking about how he can’t wait to see if you can find nostril sex online. Yes that’s a question Eminem actually asked and the world is a better place because of it.