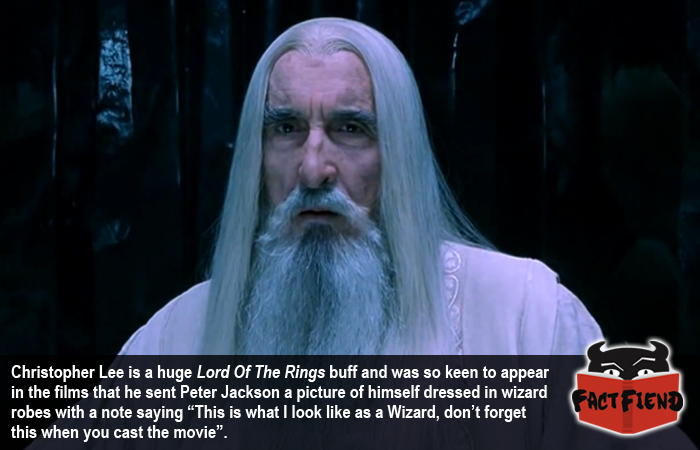 It’s a fairly well known fact that the legend that was Sir Christopher Lee, who you’ll probably recognise from his role as fucking Saruman in Lord of the Rings is actually a huge fan of the entire LOTR series. But did you know that when he first heard rumblings that a live action adaptation of the books was being made, he personally sent a letter to Peter Jackson to ask about starring in them.

But before we get into that, we want to share a little info about Christopher Lee’s early life, since his life story reads like a laundry list of things required to be a man. Along with being a war hero who was literally charged with the task of tracking down and beating the living piss out of Nazi war criminals, Christopher Lee has enjoyed a several decade long career playing some of the most powerful, pants-shittingly terrifying and down-right badass characters in film history, Dracula, Count Dooku and even the literal embodiment of death to name but a few. As if killing Nazis and being freaking Dracula wasn’t cool enough, Lee also lent his deep, booming voice to everything from the Kingdom Hearts games to metal albums with covers that look like Skyrim screenshot.

In short, Christopher Lee is so ridiculously cool he was rumored to exude a fine vapour that scientists are insistent is the same stuff found on the other side of the pillow and he was so scary that his burglar alarm was just a recording of himself sharpening a knife. Fun fact: while filming a scene in Lord of the Rings: Return of the King, in which his character, Saruman was supposed to stabbed in the back, Peter Jackson began coaching Lee on the sound a man makes when he’s stabbed to death.  Lee, very calmly stopped Jackson and informed him that he was well aware how a man reacted upon being stabbed from first hand experience and Peter Jackson shut the hell up and just let Lee do his own thing. How metal is that?

By far one of the coolest things about Christopher Lee though was that he was nerdy a huge kid when it comes to the Lord of the Rings movies and books, Lee reportedly re-read the books every single year and held the unique distinction of being the only cast member to have physically met Tolkien, which caused him to absolutely lose his shit. According to Lee he met Tolkien in a pub and was so star struck that he could only manage a meek “How do you do?” before squeeing everywhere like an excited fan girl. We should point out that at this point in his life, Lee was already a war hero/Dracula and he was still terrified of meeting Tolkien, he was just that big of a fan.

In fact Lee was such a fan of the books that when he heard rumors of there being an actual Lord of the Rings movie, he intentionally went out of his way to secure a role as a wizard in a shitty TV show called The New Adventures Of Robin Hood, just so that anyone watching would know that he’d make a boss wizard. 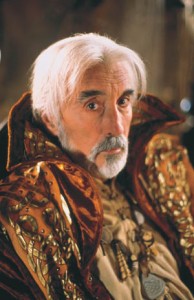 When he heard that Peter Jackson was attached to the film, he took a picture of himself in the outfit he’d worn on the show and sent it to him along with a note that read “This is what I look like as a Wizard, don’t forget this when you cast the movie“. Yes, you read the correctly, Christopher Lee took a selfie of himself dressed as a wizard and sent it to Peter Jackson.

Luckily for Lee, Jackson later admitted that he’d never had anyone else in mind to play Saruman anyway, stating that only Christopher Lee could bring what he needed to the role. What he needed obviously being a stone pimp with a voice so deep and intimidating Satan has it set as his ringtone.