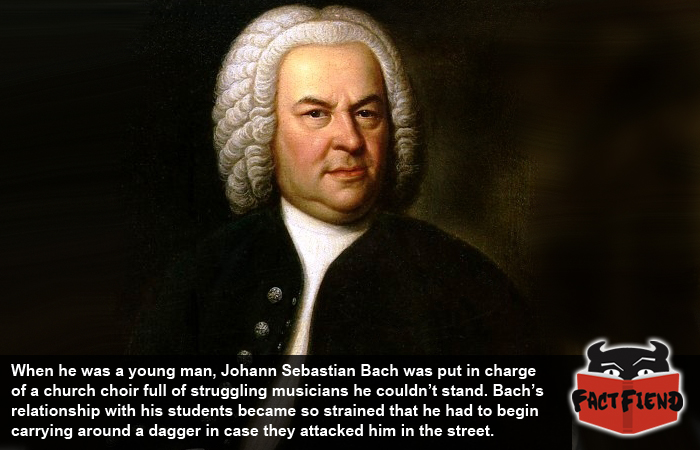 Johann Sebastian Bach is mostly known for two things, his career as one of the most prolific composers in history and his temper. In fact, Bach’s temper was so ferocious that as a young man he took to carrying a dagger to protect himself from all of the people he annoyed.

To explain, when he was in his 20’s, Bach was hired by a church who basically lumbered him with a choir full of aspiring musicians, which as well know is code for “people with shitty singing voices but understanding friends and family”. Bach resented being guilt-tripped into conducting the students because many of them were older than he was and he found it very difficult to convince them to actually listen to him. Which was kind of a problem for the portly composer because all of his students sucked immense portions of ass at playing their respective instruments and could have probably benefited from the help of the future “greatest composer of all time“. But we digress.

Frustrated by his students ineptitude and general lack of ability to do what the fuck he told them, Bach took to audibly bad-mouthing his students whenever he got the chance, which understandably upset a great deal of them. So how many of his students did Bach piss off? Well, Bach was harassed in the street by angry students so often that he took to carrying a small dagger in his belt whenever he walked outside. Just let that soak in for a moment, Bach was such an awful teacher that he was literally prepared to stab his students in the gut for stepping to him outside of class.

While it’s not known if Bach ever used the dagger in self-defence during his time as a choirmaster, we do know that he once tried to stab a bassoonist with it. However, the bassoonist was able to deftly avoid Bach’s rage-stab and counter it by tackling the composer to the ground and punching him repeatedly in the head. After the two were pulled apart and restrained, it came to light that Bach had unsurprisingly been an asshole towards the bassoonist by insulting his playing style.

Bach, ever the optimist didn’t feel that insulting someone and then trying to stab them when they called him on it made him in the bad guy in that scenario and quickly appealed to the church for them to discipline the bassoonist for having the gall to call him on his bullshit. In a move that shocked absolutely nobody, Bach was told to suck it up and try to be nicer to his students.

For more musical facts, why not learn about how the Nickleback song, How You Remind Me was recorded in about 10 minutes in a single take.