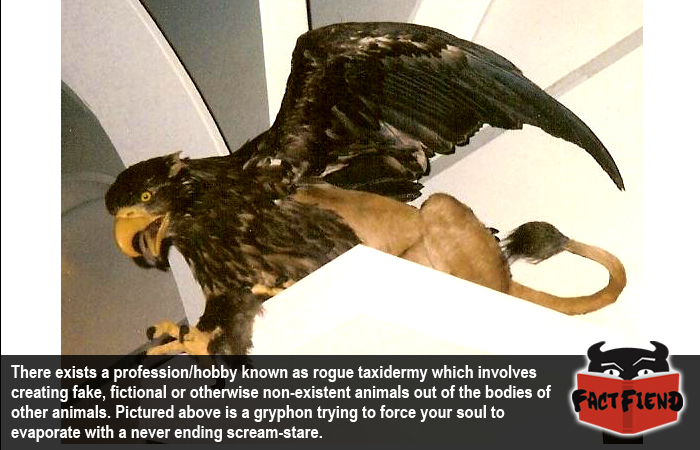 Pigeon rats aside, rogue taxidermy has, in the past, proven to be a rather unique and frustrating problem for scientists trying to discover and document new animals. For example, it wasn’t uncommon for people to sew monkey corpses to  large pieces of fish and try to pass the result off as a mermaid to gullible scientists and nobility. Which as you can guess, gets annoying after like the 8th time someone tries to do it.

As time went on and as the scientists got better at sniffing out these hilariously awesome yet completely fake creatures, they became harder and harder for hoaxers to sell, even freakshows stopped displaying them when God personally intervened and began burning down any freakshow housing them.

That’s not to say the practise has died out, today rogue taxidermists enjoy a niche, but nonetheless steady income creating mythical creatures, on demand, proving that porn isn’t the weirdest thing you can have in your Google search history. Other taxidermists who apparently don’t like the idea of only creating creatures people have heard of, have even taken to creating their own soulless abominations for shits, giggles and a stack of cash. In the process creating some of raddest and most terrifying creatures we’ve ever seen by sewing together animals we don’t didn’t even know existed and then painting them colors we assume they discovered while examining their own constant streams of terror vomit while high on paint fumes.

If you’re thinking this is the kind of hobby only a potential serial killer or a person who owns at least one pickled human face, we invite you to check out the work of Sarina Brewer, who creates and sells a whole bunch of insane and wonderfully weird animals via her site, Custom Creature Taxidermy. We highly recommend you check out Sarina’s site if you want to see the terrifyingly adorable, Punk Peep. A two headed, bright pink baby chick that could rip out your heart and shit in it as easily as it could cause it to melt.

Man, we should really get some of these for the office, a burglar alarm is nice, but nothing scares away the criminals like a three headed zombie squirrel. No one wants to rob that office.