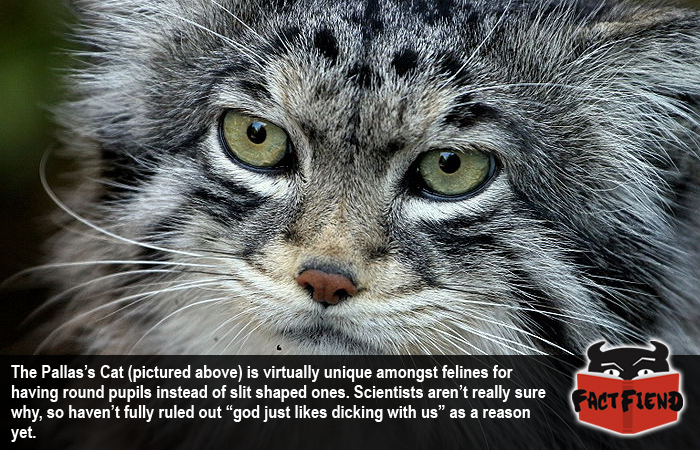 The Pallas’s cat, AKA the cat that looks like it stole the eyes of a God is a wild cat native to Asia, none of which you care about because, seriously, LOOK AT ITS EYES!

Along with the eyes (which we’ll get to in a moment)  the Pallas’s cat is known for its unusually short reproductive cycle, which means it can only breed once per year within a 24 hour window. If it is interrupted in anyway, shape or form, the cat will then refuse to mate until the following year, leading some to believe the cat is largely descended from particularly frigid or kinky tigers depending on how you look at it.

Other unique traits include the cats flat face, stumpy legs and the fact it barks instead of meowing, at this point we’re starting to think this thing is less of a cat and more of a mistake God tried to hide in the mountains. It also has fur that makes it look like really angry and disappointed all the time.

As for the cat’s eyes, no one is really sure why it has round pupils. The only other members of the cat family to share this trait are often much larger ones like the leopard and cheetah whereas the Pallas’s cat is no larger than a standard house cat you could find in any home. If you’ve ever looked into the eyes of a house-cat and been able to move past the fact you’re staring into the soul of a creature that would eat your face if you dropped dead in-front of it, you’ll notice they don’t have eyes that look like this.

We should be thankful though we guess since now we have an excuse for looking at cat pictures at work, ha, suck on that, everyone we went to college with!