For any Americans reading this who may not be familiar with James Blunt, allow us to sum him up with a single sentence. He’s like the English version of Nickleback.

We make this comparison because, like Nickleback, despite being both commercially and critically successful with a string of number one hits and best-selling albums, nobody really admits to liking James Blunt all that much. As an idea of how much people supposedly hate this man’s music, at the end of 2016, you know, that year where everybody cool died …

Blunt sent out a tweet telling people that 2017 would be a worse year because he was going to release a new album and it went the kind of viral where local newspapers reported it.

The British public first soured on Blunt after the release of his 2004 hit, You’re Beautiful mostly due to the fact, to quote Blunt “it was force-fed down people’s throats”. The song was so overplayed that a poll of British people claimed it was only marginally less annoying than cold-calling and queue jumping (cutting in line to Americans). To put in perspective how fucking insane that is, queue jumping is considered by a lot of British people to be the absolute height of rudeness, often edging out littering as the most obnoxious possible behaviour a person can engage in.

The song was so overplayed that one radio station in the UK outright removed it from rotation in 2006 and saw their listening figures nearly double overnight as a result. Before we move on, note that we said the radio station stopped playing the song in 2006 a full 2 years after it was first released. When asked if he was bothered by the negative backlash to his music, Blunt, true to his surname, was quoted as saying:

“I don’t have to listen to it. I’m the one who sings it. And it’s continued to get me laid.”

This has been a recurring theme in Blunt’s professional career with one his favourite hobbies apparently being pushing people’s shit in on Twitter. For example, in response to a fan sarcastically asking “What ever happened to James Blunt?” Blunt sent back a picture of him posing with 4 supermodels. Because nothing says fuck you like being surrounded by enough woman to satisfy Goro from Mortal Kombat. 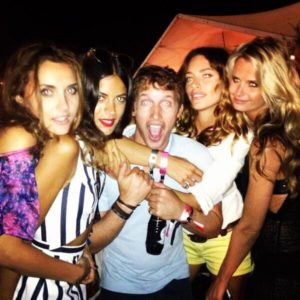 This wasn’t a one time thing and Blunt is probably more famous, at least online, these days for his god-like Twitter game, dunking on trolls like a pro and telling at least one person a week who calls him gay or lame to eat his asshole with a spoon.

Which brings us to a rather important point. Blunt is self-admittedly, not a very serious person and he personally dislikes the song as much as everyone else because his record company made him look like a sad sack of shit in the video they released for it. He was also quoted as saying he was annoyed that the video and his albums were marketed towards women, alienating potential male fans. Although we’re guessing by the above image, he kind of got over that.

This culminated in Blunt finally admitting in 2014 that the song was annoying and not representative of him as an artist. Then again, it also made him a multi-millionaire so he also admitted that he didn’t give a shit if people found it annoying. If that pisses you off, feel free to yell at Blunt on Twitter about it, we’re sure it’ll go well for you unlike it has for literally every other person who’s ever tried to start shit with him online. 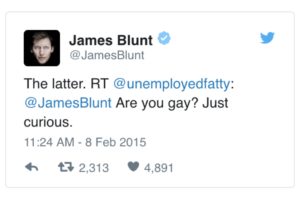