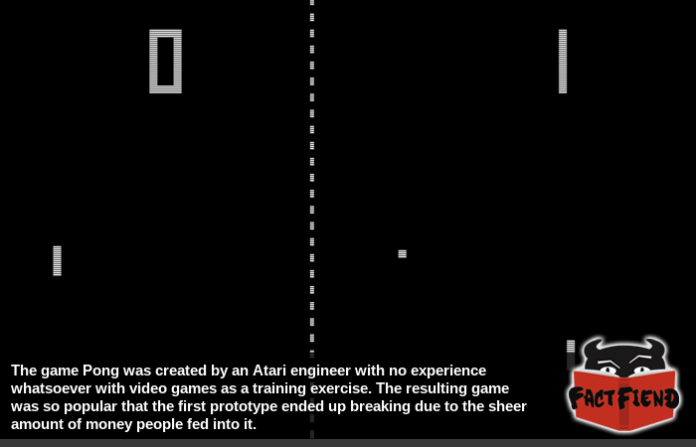 In the near 5 decades since it’s initial release, Pong has been directly responsible for more lost quarters than baggy sweatpants and couch cushions combined and more time has been spent playing it than almost any other video game in history. Curious then that it was invented by a guy who’d literally never played a video game before, as a training exercise.

That guy was Allan Alcorn, a titan in the spheres of gaming and technology known primarily for two things, inventing Pong and being the guy who first hired Steve Jobs. The latter fact famously being a thing Alcorn was widely criticised for because Jobs constantly smelled like shit. No, really.

Anyway, the story goes that in 1972 Alcorn, during his tenure at Atari, was tasked by industry pioneer, Nolan Bushnell, with creating a simple table tennis like game for General Electric. What Alcorn didn’t know though is that this was actually complete bullshit, Bushnell just wanted to see how good he was. Thinking there was a massive contract on the line, Alcorn went right ahead and made a prototype version of Pong in about 3 months and presented it to Bushnell.

According to Bushnell, whilst he originally had no plans for the game to be anything more than a simple test of Alcorn’s skill, the prototype ended up being so much fun to play, he decided to conduct some market research on its potential as a fully fledged arcade release. Sending the first prototype to Andy Capp’s Tavern, a nearby bar that had bought several pinball machines from Atari.

However, shortly after installing the machine, owner Bill Gaddis noticed that it had broken and angrily called Atari demanding that they take it back. Terrified that he’d just pissed off one of the fledgling company’s most loyal customers, Alcorn hauled ass to the bar with his toolkit to find at fix the problem. When Alcorn opened the machine up though he realised that the machine had broken for potentially the best possible reason, it was rammed to bursting with quarters. Meaning bar patrons had literally crammed so much money into the machine, it stopped working.

After fixing the issue, Gaddis sheepishly admitted to Alcorn that the machine was pretty good and that’d he’d like to order another one. Or at least he did after news of it working again resulted in a 20 foot long queue of customers trying to get into his bar to play it.