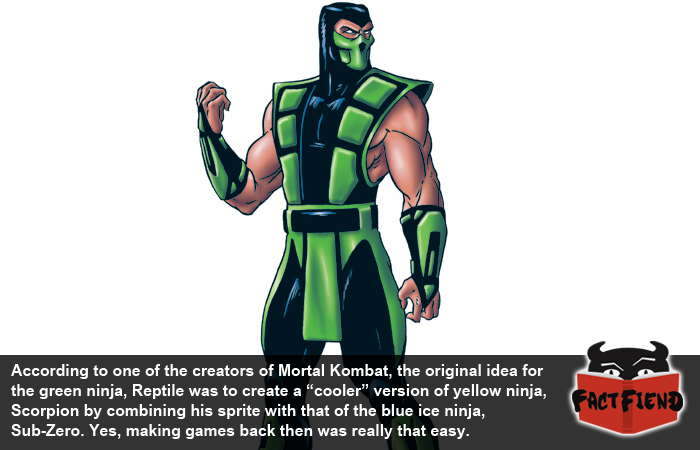 For most people there are two characters synonymous with the game Mortal Kombat, Scorpion and his eternal, better-llooking rival, Sub-Zero. Two ninjas clad in yellow and blue respectively who’ve been the franchise’s poster boys since their appearance in the first game. The popularity of these two characters is such that few people know that the green ninja, Reptile was literally created with the intention of being cooler than them both.

Within the Mortal Kombat mythos Reptile, Sub-Zero and Scorpion are part of a group known collectively by fans as the “pallete swap ninjas”, the most brazen color-coded cost-cutting measure in entertainment history since they made the Yellow Ranger in the Mighty Morphin’ Power Rangers a woman in the English version without first checking to see if the Japanese footage they used still had the actor’s impressively proportioned dong in it.

Originally intended to be a clever way to bolster a limited roster by changing the color value of an already created character in this case Scorpion and giving them a few new moves, palette swapped ninjas quickly became a beloved and integral aspect of the Mortal Kombat franchise. Over the years characters which initially looked fucking identical and were largely interchangeable save for unique special moves, became fully fleshed out characters with their own motivations, rivalries and look. The most extreme example of this is arguably Tremor, a turd-colored ninja who had a brief appearance in a near-forgotten and legendarily shitty Playstation game and had a single playable appearance in the Playstation Vita port of Mortal Kombat 2011, a game that sold so poorly this is the best screenshot we have of him … 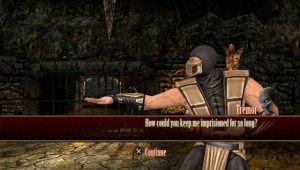 In regards to Reptile, he went from being a second palette swap of Scorpion to a weird lizard man who exudes a near-constant haze of fart gas.

Which is awesome, but also kind of weird considering Reptile’s origin. You see for those of you who didn’t know, in the first ever Mortal Kombat game, Reptile was a secret character so well hidden his very existence was nothing but a rumor for the first few months the game existed. Because the guys who made this game are, as we’ve already talked about, dicks, although the game made cryptic references to a mysterious character known as Reptile, he wasn’t even in the game until the third arcade update and to fight him you had to win two rounds perfectly on a specific stage, at a specific moment, without blocking.

Initially conceived as being quite literally a “cooler” version of the game’s other two ninja characters, in the first Mortal Kombat game Reptile had the most iconic moves of Scorpion and Sub-Zero and sported a green outfit as an overt reference to the fact he was a literal combination of them.

In the next game though, this idea was dropped almost entirely and Reptile became, true to his name, a weird reptilian humanoid with a vast array of poorly defined powers such as spitting acid and transforming into a snake. Over the years this was expanded upon even further to the point that we now know that Reptile is part of a race of essentially immortal lizard-people who are somehow tenuously related to the dinosaurs and somehow vampires. We also know that Reptile’s actual name is Syzoth, something we only found out in 2015, a full 2 decades after he was first introduced as a character. Which anyway you look at it, is a fucking long time to not know a character who has been in almost every single game’s name.