Christmas is a magical time that can turn even the most burly and gruff of men into giant man-sized children, but surely someone like Superman, the symbol of truth, justice and owning pectoral muscles that technically class as a war crime is capable of controlling himself around the holiday season, right? As it so happens though, Superman kind of loves Christmas, like a lot.

For example, in the 1940’s there was a comic in which Superman punches the shit out of a pair of criminals and then carries Santa’s sleigh around the entire world after those same dipshit criminals knock out his reindeer using a weird gas. Which isn’t even the strangest part of that story.

Now you could easily write this off as Superman helping out a fellow do-gooder the only way he knows how, by lifting heavy things and punching criminals, but in the same story he also goes out of his way to convince some random rich douche to give away all of his toys to the poor. Which again, is a nice thing to do, but imagine for a second if Superman, an invincible alien God who can fire city-flattening lasers from his eyes, flew into your room in the middle of the night and lectured you on sharing your possessions. We’re guessing that, that kid shared his toys more out of fear that Superman would come back and kick his ass than a last minute realisation that Christmas is about charity or whatever. 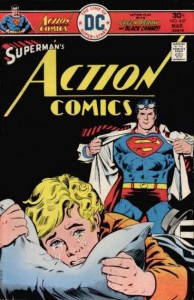 In another story featured in the animated Justice League TV show, Superman is shown to love Christmas so much that his adoptive parents, Martha and Jonathon Kent have to wrap all of his present in lead to stop him using his X-Ray vision to peek inside. Which makes sense if we were talking about a pint-sized child Superman still coming to terms with his powers and limitations, but the show makes it clear that Superman’s parents still have to do this even when Superman is an adult. There’s even a scene in which Superman is shown looking intently at his presents before saying “All lead” a tone reminiscent of a man who just learned that his girlfriend has started locking her phone to stop him reading her texts.

As if that didn’t paint Superman as a big kid already, there’s a scene earlier in the same episode in which Superman’s parents comment that they had to wrap his presents in lead, to which Superman responds “You mean SANTA wrapped them.” before taking a sip of coffee with a look in his eye that looks as though he’d debating punching someone’s head clean off their shoulders.

Which, if you ask us, actually makes Superman a more interesting character. One of the reasons Superman is boring is because he has no real limits or weakness, he can do anything, be everywhere and can stop crimes by pointing to his biceps without blinking, so it’s kind of nice to know that the Man of Steel still acts like a huge kid when it comes to Christmas. Then again, this is also kind of terrifying, think about it, the only reason Superman can’t use his X-Ray vision to sneak a peak at his presents is because his parents take physical measures to stop him. If it wasn’t for the lead wrapping paper, Superman would have used his powers to look inside and presumably wouldn’t have told anyone. So what exactly is stopping Superman from doing this when there’s something else he wants to see like a women’s changing room or the stomach of a co-worker he thinks has stolen his sandwich?

This isn’t a big jump in logic, the show clearly demonstrates that Superman has no qualms using his power to sneak a peek at something he wants and that he’s only stopped because his parents have the foresight to cover that thing in the only thing on Earth he can’t see through. Furthermore, the only reason we know that he does this is because Martian Manhunter catches him doing it while he’s invisible and then promptly never brings it up again. How often is Superman using his powers to scope out things he’s not supposed to see? How often has he seen Women Woman’s boobs, or Batman’s dick and why are we so nit-picky about comics that we turned an article about Superman loving Christmas into a diatribe on Superman being a total jerk who looks at Batman’s dick.