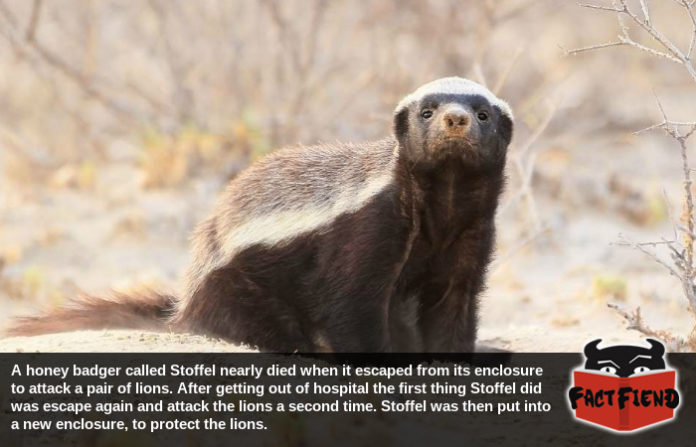 For the first time in our sporadically updated series detailing the adventures of people who were born without a fuck-producing gland in their brain the subject of the article is an animal. Specifically Stoffel, a honey badger who has been called an “ambassador for his species” due to his astonishingly blase attitude and penchant for escaping his enclosure.

A resident of the Moholoholo Wildlife Rehabilitation Centre in South Africa since the early 2000’s, Stoffel quickly became the Centre’s most famous animal resident when news of his various escapades made the news. In fact, the Centre is so indebted to the publicity Stoffel generates for them that they’ve named the Centre’s tuck shop after him and even paid an actual graphic designer real human money to design a logo for their website that you can click to read stories about how awesome he is.

Stoffel journey to international notoriety began soon after he arrived at the Centre when his handler noticed him wandering around doing badger things when they were positive he’d just been locked in his cage. Stoffel continued mysteriously slip his enclosure and would often be found attacking random animals or eating shit in the kitchens of the tuck shop now named in his honor.

On one occasion Stoffel attacked a pride of lions housed nearby who were so astonished at the size of his tiny badger-balls that they initially didn’t know what the fuck to do. After a while though the lions got the upper hand and badly savaged poor Stoffel, something his handler assuming would calm him down. Instead though the first thing Stoffel did after getting out of hospital was escape and second time to attack the lions again, this time badly injuring them by gnawing on their balls. Something, unbelievably, honey badgers do instinctively.

After this escape attempt the decision was made to move Stoffel to a better secured enclosure, not to protect him from the lions but to protect the lions from him. To keep Stoffel company, a female honey badger was also put into this enclosure, the hope being that Stoffel would be too busy fucking to want to escape again. Within hours Stoffel and his new lady badger-friend had escaped and were roaming the Centre, tiny pimp cans presumably clutched in their claws. It would later emerge that Stoffel had “convinced” the new badger to work with him to escape the enclosure together. 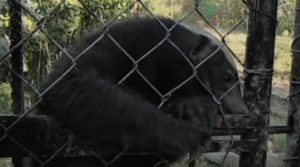 Frustrated Stoffel’s handier built an entirely new enclosure from scratch at considerable expense to the Centre custom designed to house a single animal, him. This new enclosure was basically a giant concrete basin devoid of features save for a few trees and assorted toys to keep Stoffel mentally stimulated. Again, within a couple of hours, Stoffel had escaped. This time by climbing to the top of one of the trees near the edge of the enclosure and leaping to freedom. Starting to get annoyed at this point, Stoffel’s handler cut down all the trees, a few hours later, Stoffel had escaped again. How? Well this time by piling up a bunch of rocks near the edge of the enclosure and climbing up them.

In a fit of frustration Stoffel’s handler scoured his enclosure and removed every single fucking twig and rock until it resembled a concrete bowl with a small badger in it and called it a day. Later that night he was awoken to the sound of someone breaking into his house and by this point in the article you can probably guess who they found when they turned on the lights. That’s right, fucking Stoffel!

Yes, Stoffel broke out of a supposedly escape proof enclosure and then broke into his handler’s house just to show him that he fucking could. When the handler went to inspect Stoffel’s enclosure he found that the wiley badger had dug up a bunch of dirt, rolled it into a ball and used that as a step to help him escape. At that point he was forced to admit that nothing could hold Stoffel and decided it’d be easier for everyone to just keep a closer eye on him. As you’ve probably guessed by now, a few hours after deciding this, Stoffel escaped again by stealing a rake, parkour-ing it to the corner of his enclosure and climbing up it.

At this point it’s no surprise that they ended up naming a section of the Centre after Stoffel, he walks around the place like he fucking owns it anyway.