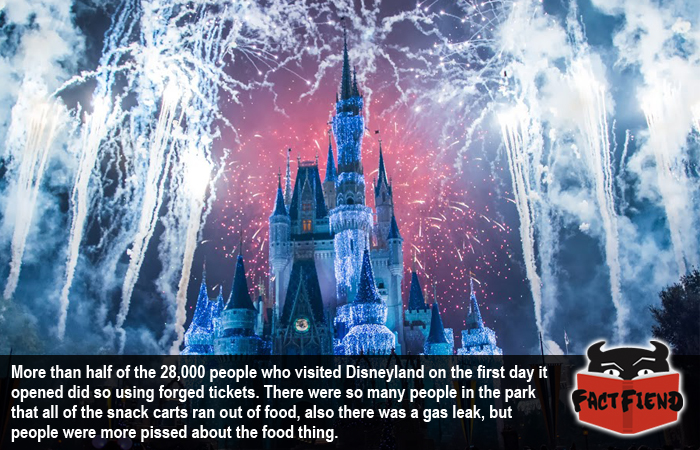 The very first day Disneyland was operational, it was only supposed to open to a select group of people, mostly consisting of dignitaries and celebrities, however, due to abundance of forged tickets, the park’s first day of operations on July 17, 1955 saw almost 30,000 people squeeze themselves through the main gate.

If you’re wondering how so many people ended up with forged tickets, you have to remember that this was in the 50’s when forging a ticket just meant you had to be able to draw reasonably well and that the opening of Disneyland was a global event covered by the world’s media, everybody wanted to get in on that shit. Due to the sheer amount of bodies trying to force themselves into the park, the people at the ticket booths had virtually no choice but to just let everyone in lest they wanted to risk being punched in the face by a fat guy in a Mickey Mouse t-shirt.

Now although today the park sees hundreds of thousands of people pass through the main gates every week, back when it was first opened, there was no way that the then (comparably) tiny park could possibly cater to that many people at once. As a result, almost as soon as the park opened all of the food carts ran out of food and so many people rushed to ride the rides that some of them physically broke down due to the amount of people trying to ride them.

If that wasn’t a weird enough image, in order to get their kids to the front of the line there are reliable reports of parents literally throwing their children over the crowds to get to the front of the line, whether or not Mickey was there to spike them onto the teacups has never been confirmed but we’re going to assume it’s true because we honestly can’t picture it any other way.

To compound problems further, the day was unseasonably warm, with the temperature reportedly hitting 101 °F (38 °C for all you Brits) at its peak. This, coupled with the lack of food or drink led to people being child-throwingly irate and just to rub things in even more, there was a gas leak in Fantasyland, resulting in that entire area being closed to the public WHO WEREN’T EVEN SUPPOSED TO BE THERE!

As if that wasn’t bad enough, some asshat working in the park forgot to lock the doors to Sleeping Beauty’s Castle, resulting in a bunch of dipshit guests stealing whatever they could get their grubby hands on from inside.

But we can’t blame all of the problems on the guests, because Walt Disney himself made a crucial mistake by opening the park too early, you see the asphalt for Main Street had only been laid that morning, and when the first guests in the park (which were primarily famous people remember) walked across it, anyone wearing high heels got their shoes stuck in the unset tar.

The day was so terrible that it is colloquially known as “Black Sunday”, however, despite all of the problems, the opening day was technically a success and thousands of people around the world still wanted to visit the park. Rather than being annoyed, Walt Disney used the day as a learning experience and by taking into consideration how the 30,000 thousand (uninvited) guests had moved around his park, he was able to streamline the entire experience for future guests. So thanks, everyone, we guess.