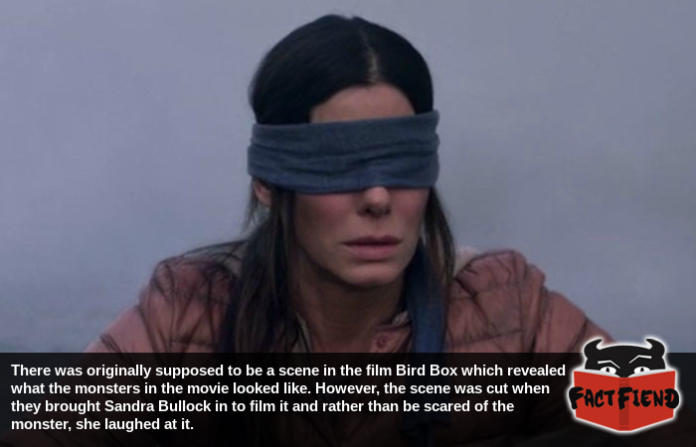 If there’s one thing you can say about Bird Box it’s that it certainly was a movie that came out in 2018. Hugely popular following its release due to the novel premise, a key element of the film that hooked viewers was the unseen monster stalking the cast. A monster that remained unseen because it looked so fucking stupid.

If you didn’t happen to watch Bird Box, a CliffsNotes version of the plot is that the world is suddenly and inexplicably besieged by unseen monsters who force people to either commit suicide or murder the shit out of one another. Whilst the exact mechanics of how this works is never really explored, characters in the film eventually theorise that it happens when a person locks eyes with one of the monsters. Which is why every piece of media you’ve likely seen related to the film shows Sandra Bullock wearing a makeshift blindfold. 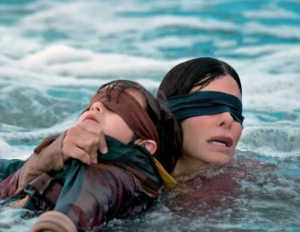 Now although the monsters are never shown on-screen, this actually ended up working in the film’s favour because unseen threats are near-universally more terrifying than ones you can see. We mean, there’s a reason why films like Alien, Jaws and Predator are so tense, humans naturally fear the unknown. And giant sharks, we guess.

Apparently though nobody told this to the producers of the movie who couldn’t understand why the film wasn’t showing what the monsters looked like. According to the film’s screenwriter, producers continually badgered him about this throughout production until he got so annoyed that he wrote an entire extra scene for the film in which Sandra Bullock had a nightmare that served no other purpose other than giving them an excuse to show off the monster if they really wanted to.

The thing is, the idea for the monster is that it was supposed to be representative of the deepest held fears of whoever viewed it, which for Bullock’s character was childbirth. As a result, the monster they ended up creating for the scene was a deformed baby monster with a snake-like body. Which, well sounds pretty scary until you realise that the snake part was going to be realised via CGI, meaning the actual thing Bullock had to respond to as if it was the scariest shit she’d ever seen in her life, was a guy wearing a green CGI bodysuit and a mask that looked like this.

According to Bullock she simply couldn’t take the monster seriously and when she first saw it on set, rather than acting scared, burst out laughing, describing it as looking like a “long, fat baby“. In fact, Bullock found the monster so stupid looking that she repeatedly told producers she didn’t want to film scenes with it because she couldn’t keep herself from laughing whenever she saw it.

As you might imagine, having the lead actress constantly laughing at how dumb the monster looked eventually made the same producers who insisted on having it in the movie realise that maybe, just maybe, the film would be scarier without it being full of long-ass babies.