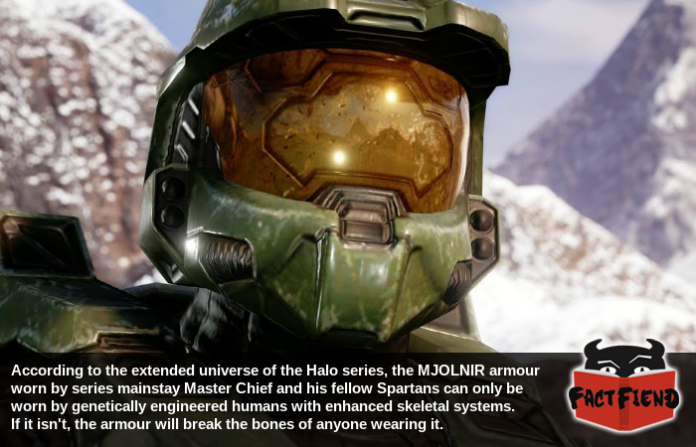 Few characters in fiction are as eminently badass as Master Chief from the Halo series. Effectively invincible on the battlefield, Master Chief’s primary asset is his iconic MJOLNIR Mark VI armour. A highly advanced piece of combat tech so deadly that it will outright kill anyone unworthy of wielding it.

A thing worth noting about MJOLNIR armour in the Halo universe is that there are several different types of it, with some being more advanced and some possessing specialised functionality to suit a specific role. However, a shared trait of all MJOLNIR armour is it’s unparalleled levels of durability. For example, consider that in one game Master Chief survived a fall from fucking orbit and walked that shit off like it was no big deal. 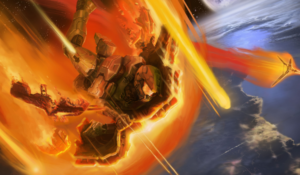 Now while you might think as the series’ mascot Master Chief’s armour is special in someway, extended universe material goes out of its way to note that he specifically prefers to wear standard issue MJOLNIR armour. Meaning technically, anyone wearing the armour could realistically survive the same fall. That is, if they could wear it without everyone bone in their body shattering the instant they tried to move.

You see, it is established in Halo media that only a person who has undergone extensive genetic and physical augmentation, an apparently agonising process that killed just as many prospective super soldiers as it created, can even wear MJOLNIR armour. Let alone use it with any degree of skill or finesse. 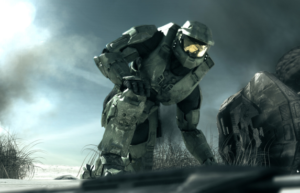 The main reason why is that the armour contains a sophisticated neural interface that links directly to a user’s mind. The end result being a near-seamless and synergistic melding of man and machine that allows the armour to move in response to subconscious impulses in the brain. Or to put it another way, wearing the armour allows you to react to threats instantly.

In addition, the armour also boasts a layers of science-crystals that reacts to and amplifies a user’s movements, dramatically augmenting their strength and speed as well as further minimising their reaction time. Which, while incredibly powerful, has its drawbacks. Mainly that the human body simply cannot move this fast.

For example, in the novel Halo: The Fall of Reach it’s noted that ordinary soldiers literally cannot wear MJOLNIR armour without injuring themselves. Why? Well because the armour responds to a user’s thoughts rather than their physical movements, regular human bones simply cannot deal and break the moments a user even thinks about moving say, an arm.

As if that wasn’t bad enough, the pain caused by the breaking of a limb causes a non-badass wearer to understandably, convulse in pain. An action that only causes the armour to move even more, breaking every bone in the wearer’s body and killing them.

It’s for this reason that Spartan II soldiers like Master Chief have reinforced skeletons and even then, there are some risks. For example in the same book noted above Master Chief nearly knocked himself the fuck out when he thought about saluting because doing so caused him to karate chop himself in the face. Which, well, is a pretty hilarious image to leave people on given that character went on to save the entire universe 5 times.