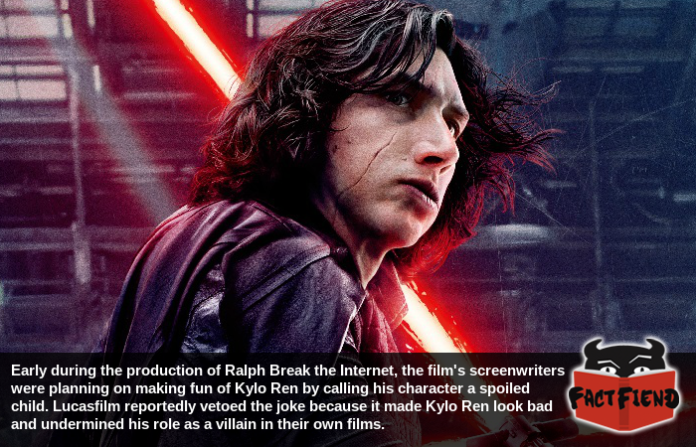 Wreck it Ralph and the subsequent sequel are homage movies that pay tribute to a number of video games and Disney properties. Oddly, while the utmost care is taken to ensure that each thing referenced in each movie was treated with the utmost respect, Lucasfilm still got all kinds of pissy at the idea of anyone making fun of Kylo Ren.

To explain, during the production of Wreck it Ralph 2, later titled Ralph Breaks the Internet, the focus of the movie was shifted away from being about video games to pop culture as a whole. A fact that allowed Disney to get its flex on and showcase the sheer breadth and diversity of content it owns as well as cram in a bunch of Disney Princesses. 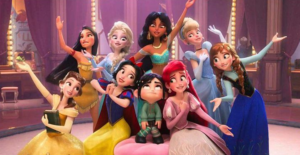 As you can imagine given how much stuff Disney owns the rights to, this gave the people making Ralph Breaks the Internet a ton of freedom when it came to writing jokes and the like. While many of these jokes were cut for time or simply not being all that funny or relevant to the intended audience of children (for example there was apparently going to be a Golden Girls reference before someone noted that nobody watching would give a fuck) only one was cut because the rights-holder got their panties in a bunch. One about Kylo Ren being a total and utter shit-weasel.

Specifically, according to one of the film’s directors, Rich Moore, a joke they wanted to make at some point in the film was to have a character casually refer to Kylo Ren as a spoiled, childish dickbeard. However, when they approached Lucasfilm to get them to sign off on the joke, they absolutely refused, stating that such a joke might undermine the characterisation of Ren they were going for. You know, the character who literally throws a temper tantrum in one movie and spends half his unmasked screentime almost crying.

At the behest of Lucasfilm the joke was cut and Ren didn’t make an appearance in the movie the irony being that removing the joke kind of did exactly what Lucasfilm were worried about. No really, just think for a moment about how little faith Lucasfilm must have had in Ren’s characterisation at that point in time that a single joke in a movie by a company that owns the rights to the character made them worry it would undermine his entire arc. We mean, do you think they ever had to worry about this kind of shit when it came to Darth Vader?

It probably also makes the whole thing funnier that the whole crux of Ren’s character is that he’s trying to live up to the mantle of Darth Vader and that nobody takes him seriously as a Sith. So yeah, because of Lucasfilm’s refusal to let anyone make fun of Ren for being a spoiled brattish man-child, it makes him instead look like a shitty, one dimensional character who’s entire arc can be derailed by a single joke.