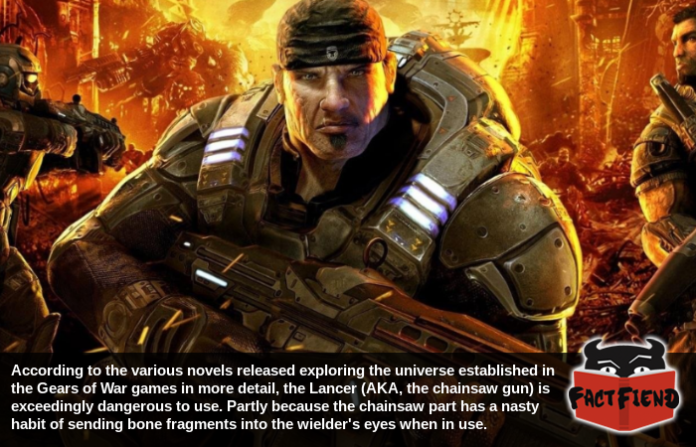 The Lancer from the Gears of War series is, in the simplest possible sense a big fuck-off machinegun with a chainsaw strapped to it. Unsurprisingly the extended Gears of War universe establishes that this gun is considered to be pretty dangerous in battle. Somewhat surprisingly though the gun is actually dangerous for the wielder because it has a nasty habit of blinding people during use.

According to Gears of War lore the chainsaw bayonet as it’s known officially was directly inspired by an impossibly badass act of heroism displayed by a fridge-shaped man-mountain called Tai Kaliso. Specifically in one novel it’s noted that while the closest thing the series has to a protagonist Marcus Fenix was wrestling with an enemy during a particularly bloody battle Tai brutally cut the enemy right the fuck in half with a nearby power saw. As an astonished Marcus looked on Tai quipped that the world was filled with weapons before going back to generally being an unthinkably heroic smasher of Locust dickholes. 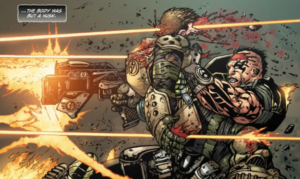 The novels continue and state that Kai’s use of the saw to royally fuck up an enemy prompted Marcus to suggest to his father, a high-ranking soldier-man in the military, to replace the shitty bayonet on their guns with a chainsaw. A suggestion so radical it was of course immediately accepted resulting in the creation of the Mark 2 Lancer Assault Rifle. Arguably the most impractically awesome fictional weapon ever devised save for perhaps Jetstream Sam’s exploding dick-sword from Metal Gear Rising: Revengeance. 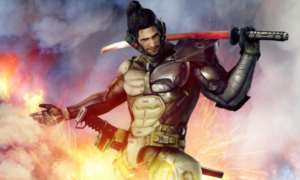 Amusingly, despite it’s obvious effectiveness at killing bad guys, supplementary information from the Gears of War novels and stuff state that the chainsaw bayonet attached to the lancer Lancer is “technically” not supposed to be used to turn a a human-sized opponent to chunks of gore. Instead being designated as a tool to be used in the field, presumably because when it’s used for murder instead of cutting vines and shit it can blind the user.

You see according to the novel Gears Of War: Aspho Fields the Lancer’s chainsaw bayonet spins so fast that chunks of the thing you’re cutting in half can be propelled toward your own eyes with such high-speed they can blind you. This being a novel based on a video game series famous for making your staple weapon a chainsaw, the novel of course goes into way more detail than is necessary about this noting that some users are blinded or even killed by bone fragments of the thing they just killed being chainsawed into their own fucking head.

The novel then explains that for this exact reason helmets or at least goggles are considered to be essential equipment for any soldier wishing to utilise the weapon to its full potential without the risk of being blinded by it. A factoid that makes most of the series’ main characters looking like huge stupid morons given that none of them ever seem bothered about protecting their eyes. You know, the things they use to see the things they’re trying to kill. 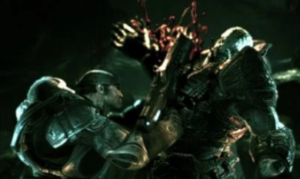 In fact, the only character in the entire fucking series who isn’t a nameless, generic soldier or person who gets immediately shot 4 seconds into the story to wear any eye protection whatsoever is a guy called Baird. Even then the character seems to mostly use them to keep his hair out of his eyes instead of to protect them from pieces of hyper-sonic organic shrapnel rocketing towards his skull. A decision we deeply respect because damn, does the guy have good hair. 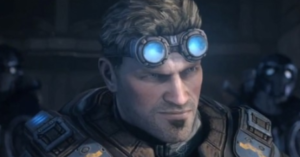