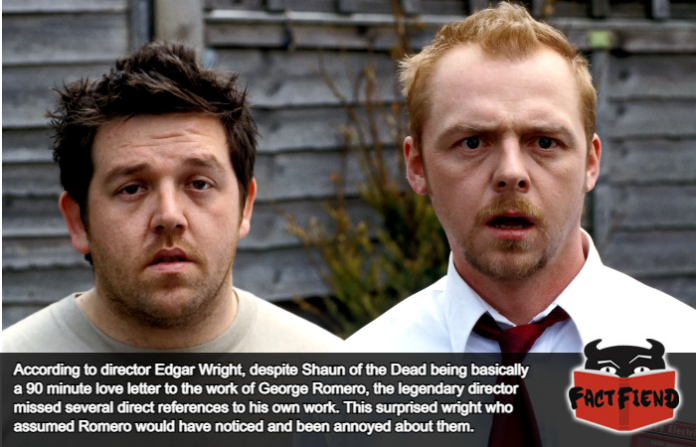 Shaun of the Dead is a 90 minute love letter to the zombie genre, a genre many agree was invented and defined by the director George Romero. A man who, whilst an admitted fan of Shaun of the Dead still somehow missed references to movies he made when watching it.

First things first it’s important to establish that Edgar Wright is a massive nerd who crams his movies full of more detail than a teddy bear stuffed with mulched encyclopedias with nearly every scene in his movies featuring an obscure reference or knowing nod to one of the pieces of media that inspired him.

Similarly the name badge worn by the titular Shaun is a reference to actor Ken Foree, most notable for playing the guy in the original Dawn of the Dead whose first instinct upon learning it’s the end of the world is to steal a massive fuck off swag-jacket …

All references which Wright expected to go over the heads of a lot of first time viewers because they’re literal blink-and-you’ll-miss-it sight gags, however one reference Wright assumed people would immediately recognise was the line “We’re coming to get you Barbara” screamed down the phone by Nick Frost at the eponymous Shaun’s long-suffering mother. An almost verbatim quote from literally the first scene in the movie that invented the genre the movie was homaging, Night of the Living Dead.

Because of this, Wright was convinced that George Romero, the guy who literally wrote and directed the whole thing would at the very least get that reference and he was reportedly shitting bricks at the idea the legendary director would disapprove of ripping off his work of seminal zombie fiction. So much so that Wright has since gone on record as saying that the only person whose opinion on the movie mattered was George Romero’s and upon learning the director liked it, Wright insisted that his feedback of the film being an “absolute blast” appear as a quote on every piece of advertising for the film.

Anyway, it would later emerge that none of this effort and bluster was all that necessary because Romero didn’t even notice the reference, which remember was to a film he wrote, to the point he needed to be actively reminded of the line they were referencing to get it and even then he didn’t reportedly didn’t give a shit. He just thought the movie was, as noted, an absolute blast, a level of praise it’s worth noting he didn’t give to the 2004 remake of Dawn of the Dead which he negatively likened to a video game. Something that makes sense when you realise it was directed by Zack Snyder.