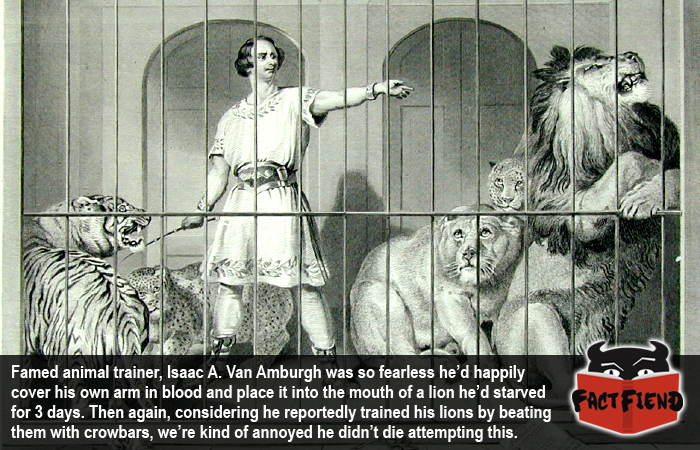 If the term “lion taming” doesn’t immediately cause you to think of a granite chested, ball-smashing slab of chiselled man-meat sporting a moustache you could choke a Hydra with, you probably read the wrongs books when you were a child. Though lion tamers enjoy a reputation as fearless badasses today, the first one in recorded history was actually a huge asshole.

As mentioned above, the image most people have of a lion tamer is probably something like this.

That is literally the first image that comes up if you put “Lion tamer” into Google and we’re almost positive it’s the cure for erectile dysfunction in image form. Everything about this man screams “masculinity”, his powerful stance, the fact he’s wearing a cape that is A STILL LIVING LION or the fact he is forced to wear a dress because normal sized trousers can’t cradle his gigantic, lead-lined balls.

If you told us that image was carved into the side of a mountain with a machine-gun loaded with bullets coated in bull shark semen, we would absolutely believe you before punching you in the face due to how frickin’ pumped up looking at it made us. Lion tamers are straight up, G, they step into a cage with the king of the jungle and tell it what to do.

So then, it’s a little odd that the first lion tamer in history looked less like he could rip out your ribs and stab you in the eyes with them and more like a child molester condemned to the most fitting death in history. 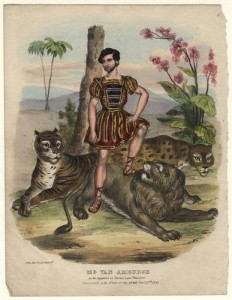 That is a promotional image of Isaac A. Van Amburgh, the guy noted as being one of the first, if not the first man in recorded history to train wild animals for circus performances. Along with being a very well respected circus trainer, Amburgh was also a fearless lion tamer, if you’re wondering how a man who looked like the biggest pussy in the room when he was surrounded by 3 tigers managed to not be torn to pieces by them the second he walked into their cage, Amburgh beat respect into them.

Though animal trainers and zoos have always come under fire for treating animals poorly, Amburgh took abuse to another level and managed to make people question his methods in the 1800’s, a time when we didn’t even give a shit about people if they were the wrong color, let alone animals. According to various sources, Amburgh mercilessly beat the piss out of his lions at every opportunity with whips and even crowbars.

The end result was lions and tiger so passive they’d meekly lick Amburgh’s feet and let him to place his head in their mouths (he was the first known person to do this). Even though practically nobody would have cared if one of the lions mauled him to death, Amburgh, with careful use of his whip managed to avoid dying for several decades and despite widespread condemnation for his cruelty he’s gone down in history as one of the greatest animal trainers of all time.

You know, the same way the Chinese Olympic Gymnastic team is considered one of the the greatest in the world, sure they can do all those cool flips, but given a chance you know they’d break their trainers neck with a single twist of their freakishly strong thighs.