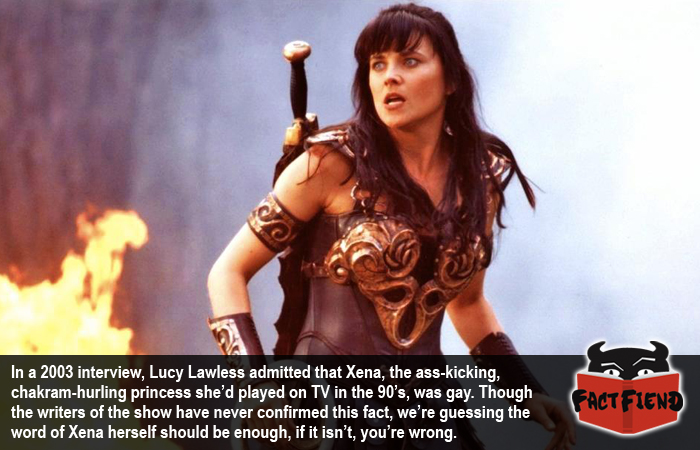 Xena is one of the single most badass female characters in pop culture history. We’re not here to talk about Xena’s impressive on screen body-count or all those people she punched to death though, we’re here to talk about the fact she was probably one of the first gay protagonists to grace our TV screens, even if we didn’t know it.

First things first, this fact has only ever been confirmed by Lucy Lawless (the woman who donned the bronze corset) in an interview conducted after the show came to an end. However, as mentioned above, we’re pretty sure we can trust Lawless’ opinion on a character she played for 5 freaking years.

For those of you who watched the show without picking up on the massive homosexual overtones present between Xena and her lady friend, Gabrielle. There has always been a small, but nonetheless vocal subsection of fans of the show who have insisted that there was something going on between the two. However, none of the writers from the show have ever confirmed this, leaving fans with theories, but not much else.

That was until someone decided to ask Xena herself whether she thought her character enjoyed the company of women. In a 2003 interview with Lesbian News (yes, that’s a real magazine) Lucy Lawless revealed that she personally felt that Xena was “definitely gay”,  considering Lawless is the person who played the character, that’s about as close as anyone is ever going to get to a definitive answer on the subject of what or who Xena likes to do in her spare time.

Weirdly, Lawless only began thinking about this after the show ended, in that same interview she revealed that’s she’d never really taken the character seriously and spent most of her time on film just enjoying the sweet gig of kicking men in the nuts and throwing chakrams at Hercules. However, once the show ended, Lawless became immediately aware of the the impact her character had, had on gay women around the globe.

When Lawless learned that many gay women thought of Xena as both a role model and an example of a strong independent woman who didn’t take shit from anyone who, snapped necks and cashed checks like there was no tomorrow, she began to think about her own thoughts on the characters sexuality. Upon realising that, it didn’t take Lawless long to realised that Xena probably was gay.