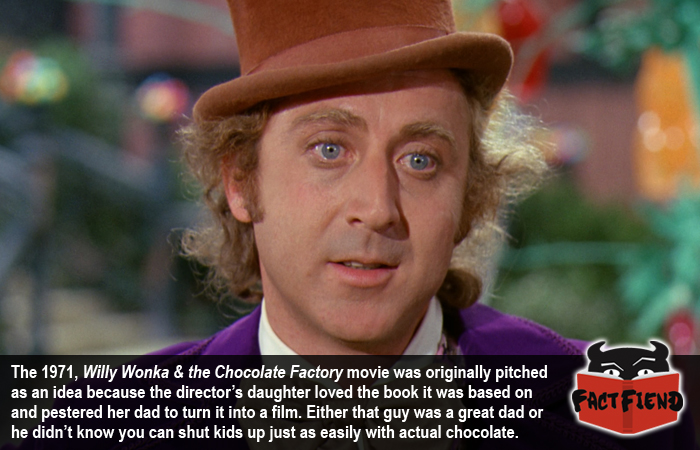 The original Charlie and the Chocolate Factory movie, oddly called, Willy Wonka & the Chocolate Factory for no reason we can discern is consistently rated as one of the finest children’s movies of all time, impressive considering it features one of the singular most terrifying scenes ever filmed. But we digress, the film would have never been made in the first place if it wasn’t for one little girl who really liked reading.

Yep, pretty much the only reason the film exists is because Mel Stuart’s daughter really loved the book and she repeatedly begged her dad, a big time director, to make a movie about it. Proving that his daughter was both demanding and had great taste in children’s literature.

As Stuart would later recall in interviews before his death, his daughter Madeleine adored the book and read it cover to cover so many times she would have turned orange if it wasn’t for the fact Oompa Loompas in the original book were black pygmies. Yeah, that’s one of those things that kind of gets left out in the movie adaptations, isn’t it?

Racist undertones aside, Madeleine was insistent and after hearing his daughter rage about how much she loved the book for a week straight, Stuart reluctantly showed it to his friend. This friend, in a huge stroke of luck, just so happened to be in talks with the Quaker Oats Company about a unique way for them launch a new candy bar.

Armed with this knowledge and a dog eared copy of the book, the idea was put forward to Quaker Oats for them to financially back a movie based on the book and produce a candy bar as a promotional tie in. Quakers agreed and immediately set about producing the “Quaker Oats Wonka Bar” to tie in with the film. A candy bar we’d like to add “tasted like shit” resulting in terrible sales. But hey, Madeleine got her movie and was even allowed a small part in it and when it comes down to it, isn’t that what really matters?

We were going to link to the remake, but then we remembered that it sucked balls.