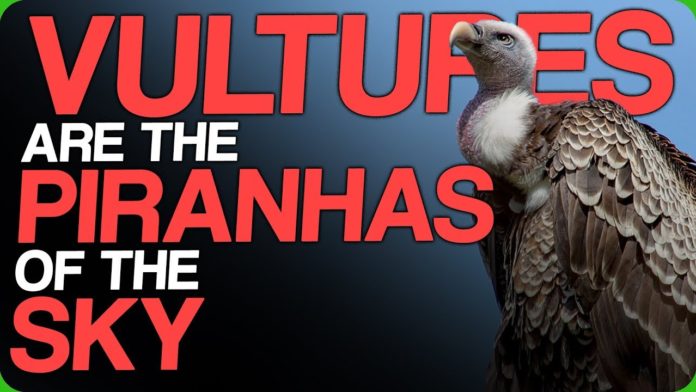 Vultures are considered by many to be dirty, disease ridden sky rats, which is kind of unfair for reasons we’ll get to in a moment. But first, lets talk about how vultures can turn something into a skeleton in a matter of minutes.

Vultures have an impressive digestive system that can digest everything from rotten flesh to whale dick bones (a thing that actually exists and isn’t something we’re making up) and they’re not exactly picky when it comes to which part of an animal they eat. These two facts to combine to make vultures arguably the finest scavengers in the animal kingdom. The ultimate proof of this comes in how fast a group or wake of vultures can turn a given corpse into a skull-shaped rock and a pile of white sticks.

According to anecdotal evidence collected from Indian farmers, during the 80’s one of the vulturiest times in history when sky we guess was plentiful, the easiest way to dispose of a dead cow was to skin it and leave it to the elements and vultures, the latter of which would descend on the carcass in groups of several hundred, skeletonizing it in “20 minutes“. Of course since this is purely anecdotal it’s important to take it with a pinch of salt but it’s not without precedent.

For example, forensic researchers in Texas once left a human corpse out in the woods to see how quickly vultures would turn it into a fabulous skeleton, you know, for science. According to their observations, 30 vultures were able to strip all of the flesh from the corpse in 5 hours. While it’s not exactly scientific, we’re going to go out on a limb and suggest that a group of 200 vultures could accomplish that way quicker and a 1000 vultures could probably do it in like, 8 seconds.

As we noted in the introduction, vultures are rather unfairly categorized as dirty creatures, which actually couldn’t be further from the truth. You see, vultures have incredibly hardy stomachs that can digest a host of disease causing bacteria, effectively removing them from the environment in which the vulture lives. Vultures also poop and urinate a powerful antiseptic which similarly kills disease and sterilizes whatever the vulture is standing on, usually food. Providing a valuable, albeit unsavoury service for the local populace and a stark warning to anyone thinking of calling dibs on anything a vulture is currently eating.

Of course, this shouldn’t detract you from the more pressing fact that a small group of vultures could turn you into a skeleton in a few hours and then shit bleach all over your corpse.