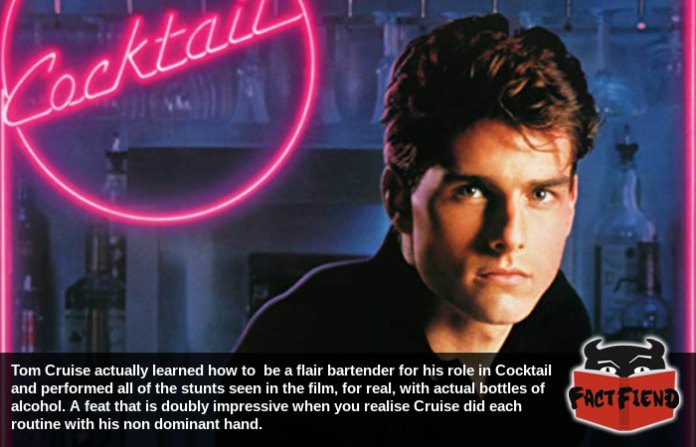 We feel its fair to say that over the years Tom Cruise has forged a reputation as a masochistic crazy-person when it comes to stunts in his movies. A noted perfectionist, Cruise’s dedication to his craft is such that he’s actively taught his body to go against its own instincts whilst mastering several obscure skills just for the hell of it.

First though for anyone unfamiliar with the kind of hellacious punishment Cruise willingly subjects himself to while making movies, the actor is well known in Hollywood for always insisting on doing his own stunts regardless of how dangerous they are. Hell, in some cases Cruise has been known to suggest ideas for his own stunts, either because he thinks they’ll look cool or the stunt involves something he wants to try, like the free climbing scene in Mission: Impossible II which was only really included in the film because Tom Cruise thought it was neat and wanted to try it out.

On other occasions Cruise has insisted on performing stunts multiple times, even after getting a decent take, just to get a better shot. Like in Mission: Impossible 3 when he insisted on performing a stunt that involved him being thrown violently into a car a total of 7 times purely because he wanted to be thrown into the car when he was running at his top speed. Which for Tom Cruise rests somewhere between 20 mph and Mach 1.

A fact that probably has you wondering, “but why?”, the answer to which is, it helps Cruise concentrate. You see, Cruise suffered horribly with dyslexia as a child to the point he described himself as “functionally illiterate“ as a young child. According to Cruise he learned to overcome this by focusing himself totally on a goal or target. A facet of his personality that has carried over to his acting with Cruise focusing like a laser on whatever his latest role requires him to do.

For example in Cocktail Cruise practised flair bartending with a master of the art to the point he was basically good enough to compete with the guy who trained him. If you’re currently thinking that Cruise probably learned how to do this and then promptly forgot everything, he was still able to perform a few of the moves on demand decades later for a skit on a talk show.

Likewise when Cruise was filming The Color of Money – a film about pool – he similarly got all hyper-obsessive and bought a pool table on which he practised tricks shots for several hours every evening. Cruise eventually became so good at pool because of this that he was able to perform every shot seen in the final movie except one the on-set pool expert deemed too difficult. 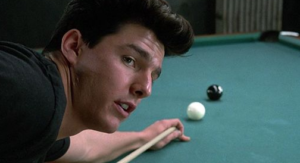 We should point out here that it was widely agreed Cruise could have learned to pull the shot off, it would have just taken him too long to perfect it. By which we mean it would have halted production for two days while Cruise mastered it. Yes, Tom Cruise got so good at pool that the hardest possible shot a guy who played the game his entire life could think up, would have taken him 2 days to learn.

What really makes all this impressive though is that in all these cases Cruise learned to do these things with his right hand. Which doesn’t seem all that strange until you realise Tom Cruise is naturally left handed, he just figured these things would look more natural being performed with his right hand so learned to do them that way. You know, even though it went against every one of his natural instincts.