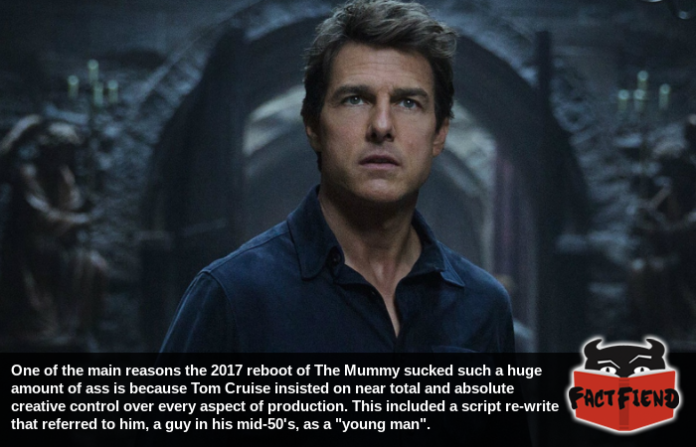 It’s fairly well known by now that Tom Cruise as a crazy, egomaniacal asshole with image issues. The latter of which he has largely tried to address over the years by appearing in dozens of films where he gets to pretend to have a massive penis. Perhaps the finest example of Cruise ego-stroking came in 2017 when he re-wrote The Mummy to be more about him.

You see, according to Variety the earliest drafts of the sputtering, fetid turd that was the 2017 remake of The Mummy, the film was originally supposed to be about, well, the mummy. 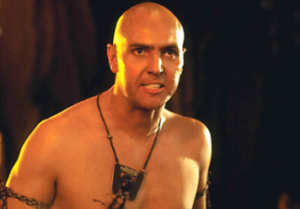 Specifically it’s noted that in early drafts main character Nick Morton and the titular shambolic corpse were supposed to have a roughly equal amount of screentime. Which well makes sense, because that’s how movies work. This all changed though when Tom Cruise signed on to appear in the film and decided that a film about a sexy female mummy with the ability to fire scorpions out of her eyes wasn’t interesting enough. Luckily Tom Cruise knew just what the film needed to appeal to movie goers. Tom Cruise. 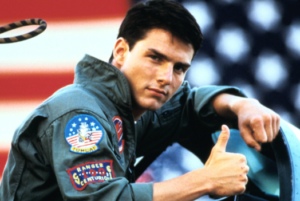 To ensure this happened, Cruise reportedly agreed to star in the film for far less than his usual astronomical fee in return for near total and absolute creative control over every aspect of production. In addition Cruise also saw to it that his contract ensured him a guaranteed spot in any sequels or crossover films Universal planned to release related to The Mummy. A potentially far more lucrative deal for Cruise if the film succeeded and Universal was able to follow through on its plan of creating a cinematic universe centred around old monster movies. Something the studio unironically decided to call The Dark Universe because fuck us, we guess. 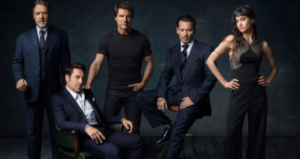 Obviously “inspired” by the success of the MCU, the deal likely would have made Cruise millions if not for the fact he just couldn’t resist making a movie called The Mummy all about him. It’s noted that before Cruise’s signature on his contract had even dried he’d set about turning the movie into a by-the-numbers Tom Cruise action flick.

According to those unfortunate enough to have this bloated turd of a movie on their IMDB page, Cruise micro-managed almost every aspect of production to the point the director would just stand their awkwardly during filming as Cruise told everyone what to do. As if this wasn’t bad enough, Cruise also brought in a team of script-writers he commissioned to write an entirely new script that made his dick look as big as possible. Something that likely explains why the existence of a scene where Cruise’s character has his shirt off. Which is obviously what people wanted to see in a film starring one of the hottest women on the planet. 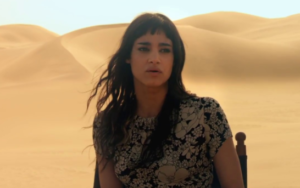 Speaking of which, Cruise personally saw to it that Sofia Boutella, ya know, the actress playing the film’s title fucking character, had a reduced role in the final film. Going as far as having her character’s arc excised from the film in favor of one that made him look good.

Understandably the film flopped horribly and was savaged by critics for being more a vehicle for Cruise’s giant head than it was a movie intended to launch an entire cinematic universe. Which is a shame because it means they’ll likely never listen to our idea for a sequel that reveals Rick” O’Connell assumed the mantle of Van Helsing and now hunts vampires with a magic shotgun. 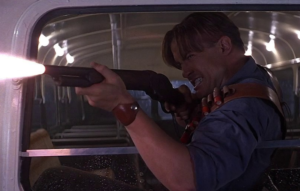