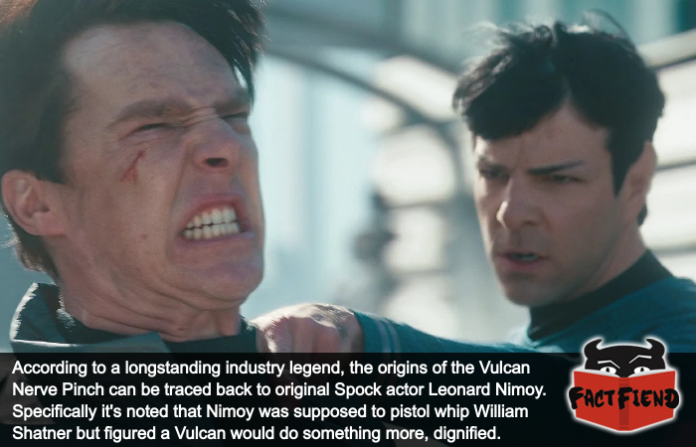 Within the context of the Star Trek universe the Vulcans are a long-lived and scientifically inclined sentient race who, in typical sci-fi fashion, are defined by a singular trait, in this case, cold rock hard logic and reason. So much so actor Leonard Nimoy once turned down a chance to punch William Shatner in the back of the head because it’s not what a Vulcan would do.

To explain, in Star Trek canon there’s a special move utilised by Vulcans when they input a dragon punch motion affectionately referred to by fans as the Vulcan Nerve Pinch. A simple, unassuming movement that allows a given Vulcan to instantly incapacitate near enough any humanoid opponent by forcefully gripping at their throat. A move so potent that it even works on feral animal men with indestructible metal skeletons.

Exactly how the VNP works is unclear and has never been satisfactorily answered in Star Trek canon, in part due to the fact that every time they’ve tried to explain it, they introduce something that contradicts that explanation. For example, Nerve Pinch Inventor Leonard Nimoy reasoned that Vulcan’s perhaps used their latent telepathic abilities to render a victim of The Pinch comatose, which made sense right up until the show decided to show a bunch of non-Vulcans using it. 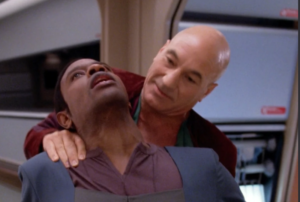 Likewise it has alternately been suggested that the pinch laser targets an as of yet undisclosed cluster of nerves in a persons neck that, when squeezed just right, cause such debilitating pain that a person has no choice but to eat shit and fall over. The theory posits that striking this nerve in the exact right way is difficult and requires such inhuman precision that while it is possible for other races to learn it, only Vulcans have the patience to master it.

Either way, the move is now an iconic aspect of Star Trek lore and it owes its existence to an argument between Leonard Nimoy and the writers on the original series. To explain, the story goes that while filming the episode The Enemy Within, in which a double of Captain Kirk runs amok, the script called for Spock to royally fuck him up by pistol whipping him with a phaser from behind. A direction Nimoy didn’t think fit with the established character of Spock or Vulcan culture in general. Which makes sense, Vulcans are generally shown as being impossibly composed at all times, rarely, if ever resorting to acts of physical violence. 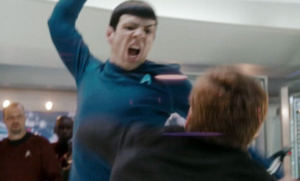 So instead Nimoy suggested that Spock would incapacitate Kirk’s Double, not by clocking him in the swede from behind, but by simply pinching his neck and rendering him unconscious. When asked how this would work, Nimoy is said to have simply responded “Spock is an alien” and noted how he would likely have detailed knowledge of human anatomy. Knowledge he could use to fuck a person up. This did little to reassure the writers but did, reportedly click with Shatner who is said to have “instantly” got what Nimoy meant and was instrumental in selling The Pinch through use of his now trademark overacting. Reportedly acting as if the pinch sent a bolt of lightning through his nervous system. 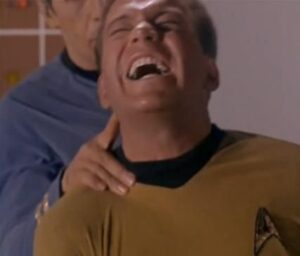 Whatever the case, the scene ended up being one of the most iconic in the series and as a result they started adding more conflict to the scripts of later episodes purely to justify having Spock do it again.