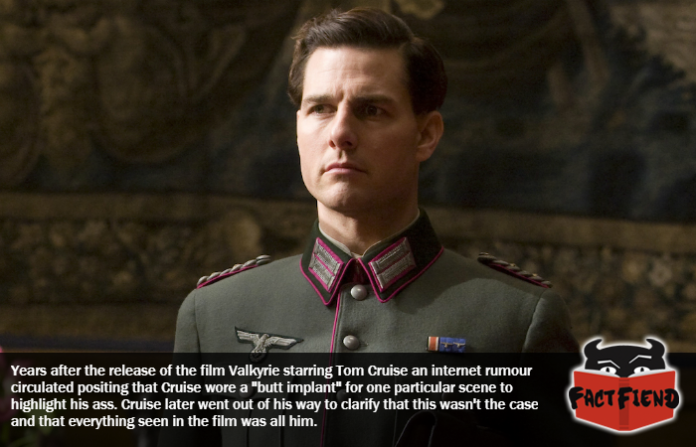 Tom Cruise is a man who takes great pride in his appearance and invariably includes at least one vanity shot of his, admittedly impressive, physique in each movie that he appears in. Perhaps the weirdest example of this is a shot in the film Valkyrie that showcases Cruise’s giant slappable ass. A shot he later insisted involved absolutely no CGI or camera trickery.

First though, without further ado, the shot in question which, as far as we can tell, was first discovered by that great internet scholar known as – @iluvbutts247

In their now-viral tweet, Professor Butts posits that, for this single shot of the movie, Cruise wore a prosthetic ass because, come on. Look at that definition, Cruise’s ass looks like Michelangelo himself carved it out of marble coated in Viagra. It looks like if you asked him how many squats he did he’d simply answer, all of them.

Now if this tweet was about a celebrity who wasn’t Tom Cruise it’s likely people would have laughed it off and moved on, however, since Cruise is a man known for his massive, swaggering ego people genuinely started to ask themselves, did Tom Cruise wear an immaculately sculpted butt prosthetic? We mean, think about it. Cruise is a man who once used his influence and star power to have a line inserted into The Mummy referring to him as a “young man” despite being over 50 years old when the movie was being filmed. With stuff like that in mind it’s not that insane to think he also wore a fake ass for one shot of a random movie nobody gives a shit about any more.

Well according to Cruise that’s not the case because an interviewer for ScreenRant who presumably had the image above burned into their brain, saw fit to ask him about it. As an aside, because this is kind of amazing, the same interviewer reached out to the film’s screenwriter before just up and asking Cruise directly. Apparently said screenwriter simply refused to comment.

Moving on, Cruise was reportedly unaware of the tweet (he doesn’t really use the internet or social media) and noted upon learning of its existence that, while amusing, it wasn’t true. It gets just a little bit better though because in addition to denying the use of prosthetic also discounted the use of CGI. Which we didn’t even know was an option but would 100% support becoming a thing that happens in every single movie going forward.