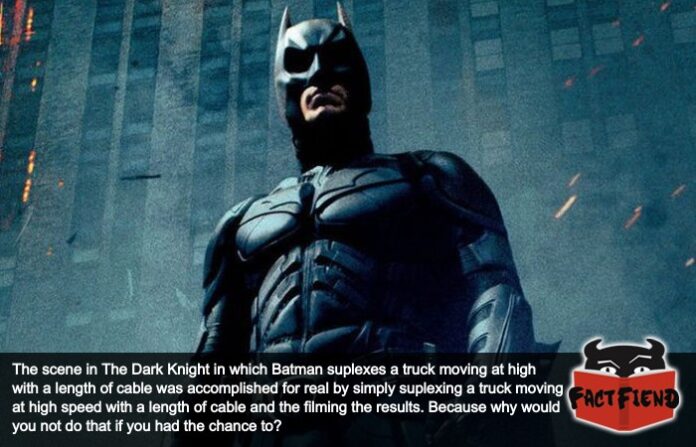 Christopher Nolan is a filmmaker who generally insists on realising as many things as possible in his movies via practical effects. An ethos that resulted in the director supervising the first and perhaps only, truck suplex ever filmed when making The Dark Knight.

Said truck suplex occurs at around the halfway point of the film and is sandwiched between and contains some of the best shots in the entire film. By which we of course mean, shots of Heath Ledger Joker pouring hot sauce on the scenery and gnawing on it like a fucking legend.

Anyway, the climax of the scene is the literal trailer shot of an entire semi being flipped over by Batman via careful use of high-tensile bat-wires placed directly in its path.

A shot that, upon the film’s release, many assumed was accomplished via CGI, miniatures or really anything that didn’t involve flipping over an entire 10 ton truck because how in the hell would you even do that? Well the answer to that is, according to Christopher Nolan, very carefully.

You see, everything seen in that image is real and there is no camera trickery involved whatsoever. It’s a real truck, on a real street that is really being flipped the fuck over. Largely because Nolan enjoys the challenge of realising such complex shots practically and also because he fucking hates CGI. Something that, while laudable, caused endless headaches for the effects team when they tried to figure out how to actually do it.

Curiously while you’d think flipping the truck itself to be the most difficult part of the stunt to realise, the effects team reportedly figured that out pretty quickly. Eventually settling on the tried and tested method of covering the underside of the truck’s trailer with TNT designed to set off an air piston powerful enough to flip the truck all the way over. 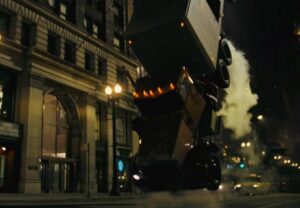 As an aside, because this is amazing, as you can see from the image above this air piston created a massive cloud of smoke not present in the final film. Well as it turns out, that was removed in post-production using CGI, meaning that the only CGI used in this scenes was used to remove the evidence that they did it for real.

Anyway, the part of the stunt that caused issues wasn’t figuring out how to flip the truck, but when. Why? Well because the stunt was filmed on a real street there was a very real chance that if they fucked it up, the truck would fly through the facade of one of the nearby buildings. Compounding this risk was the fact that the sheer amount of explosives needed to flip the truck could have potentially blown a whole through the street itself, damaging a water main or some shit. This meant that the guy driving the truck had to detonate the explosives at the exact right time. Also yes, you read that correctly, there was a guy driving the truck when this happened. Jim Wilkey, seasoned Hollywood badass.

Even more impressively is that Wilkey had a split second window to detonate the charge that would flip the truck and his only real cue was a small blue cross of tape on the road. Which he had to be able to spot whilst moving at high speed, from the cab of a truck that was going to explode.

Wilkey being a badass of course nailed the stunt on the first try and the movie got its shot.